Jacksonians Contemplate Dreams and Aspirations With 'Before I Die' Wall 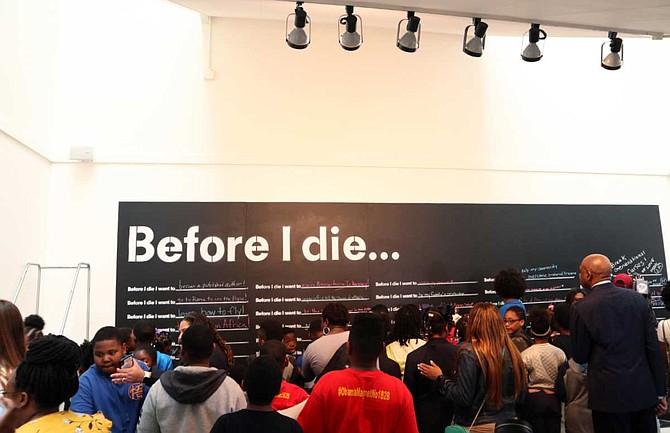 The Greater Jackson Arts Council and Visit Jackson unveiled Jackson's "Before I Die" wall, a project that artist and activist Candy Chang began in 2015. Photo by Amber Helsel.

JACKSON — The scene at the Arts Center of Mississippi was one of chaos. A throng of people gathered in the lobby just before the stairs, some getting coffee and muffins, some talking among themselves. Students from Barack Obama Magnet School and Tougaloo College sat on the stairwell, their arms perched on the railing as they watched the crowd below. All in the arts center on April 17 were waiting on one thing: getting a first look at Jackson's "Before I Die" wall. The city's wall, which is part of the "Quality of Life" programming partnership between the Greater Jackson Arts Council and Visit Jackson, is now one of around 5,000 around the world.

Once the green cover came down, the real event began, as onlookers watched former Mayor Harvey Johnson write on the wall. Others in the crowd then followed pursuit.

Candy Chang started the project in 2015 after the death of a loved one, Joan. The website for the "Before I Die" project says that Chang thought about how Joan wanted to do so many things with her life before she died. As she dealt with grief and depression, she also began to notice how much we as humans avoid confronting death.

"(Chang) was questioning her own mortality, and she was also questioning loneliness, which now statistically (is) one of the worst diseases in the United States," says Greater Jackson Arts Council Executive Director Janet Scott. " ... She wanted to do something that would bring people together to talk about that subject." In a 2018 Cigna study on loneliness in America, 46 percent of those surveyed reported always feeling alone, and 47 percent reported feeling left out.

"Before I Die" Wall Unveiling at Arts Center

The "Before I Die" wall, which Candy Chang conceived, prompts viewers to think over their lives and then write down something they want to do before they die. There are more than 5,000 walls across the world. The Greater Jackson Arts Council unveiled one at the Arts Center of Mississippi in Jackson on Wednesday, April 17. Photos by Amber Helsel

Amid Chang's contemplation, she decided to try an experiment. She created a stencil of the words "Before I die I want to..." and with help from friends, she turned the wall of an abandoned house in her neighborhood into a giant chalkboard wall where people could come and write their dreams and aspirations.

"Out of that grief and that depression, I made this thing on an abandoned house in my neighborhood in New Orleans just to see if I could find a little bit more perspective of my neighbors," Chang said at the arts center press conference on April 17. "... I had no idea what to expect, but by the next day, the wall was entirely filled out, and it kept growing."

Scott says GJAC decided to bring the wall here because it would give people a chance to contemplate their lives.

The Jackson wall is a little different, as once it is filled up, GJAC and Visit Jackson plan to seal it, making it the first permanent "Before I Die" wall.

"For what we do here at the council in making sure that creativity (creates) a positive impact on the community, the work that we're investing in the Jackson surrounding area as it relates to art, we want the community to know that their feelings are heard, that the healing that we see that needs to happen here ... is being respected and heard, and we know at the council we're getting that voice out for this community," says Silbrina Wright, GJAC special events manager.

Making the wall permanent will leave a legacy for families of those who sign the wall, she says, and it also gives those whose voices may not otherwise be heard an outlet.

"These are just 'regular Joe' folk that are in the community that have interests and investments, and we want them to know that their hopes and dreams are just as special as anyone else, that it has a platform," Wright says. "One of the things that we are focused on here at the council is being able to impact the community, and show the community the value that they have to the richness of the City of Jackson and the surrounding area as it relates to art. Sealing it only confirms that. It makes sure that they know that these things are permanently heard."

The "Before I Die" wall is open to anyone who visits the Arts Center of Mississippi.

The wall is part of the organization's recent focus on art and social justice, Scott says.

"The world itself actually needs a lot of healing," she says, "and we have focused on that. I've always said, 'I don't want art to be a nicety. I want it to be a necessity,' and that is the reason that we are trying really hard (to do) ... to hear everyone in the community and how they feel and what they feel. As the council, we can cross those barriers and get deep into our neighborhoods and into our communities and in our schools and let people actually vent ... (about) the things that are bothering them, the troubles they're going through. Using art as a therapy really helps people understand why they're angry, why they're hurt, why they're happy, a lot of reasons, but they're able to actually come to grips with it using an art medium. ... They can come to grips with that and maybe understand it a little better."

Chang said in a 2016 TED Talk that the "Before I die" wall is "about knowing you're not alone; It's about understanding our neighbors in new and enlightening ways; it's about making space for reflection and contemplation; and remembering what really matters most to us as we grow and change."

The wall is open to anyone who comes through the arts center (201 E. Pascagoula St.), Scott says. It is open Monday through Saturday from 10 a.m. to 6 p.m. For more information, find the Greater Jackson Arts Council on Facebook. For more information on the "Before I Die" project, visit beforeidieproject.com.