Vegan Food for All 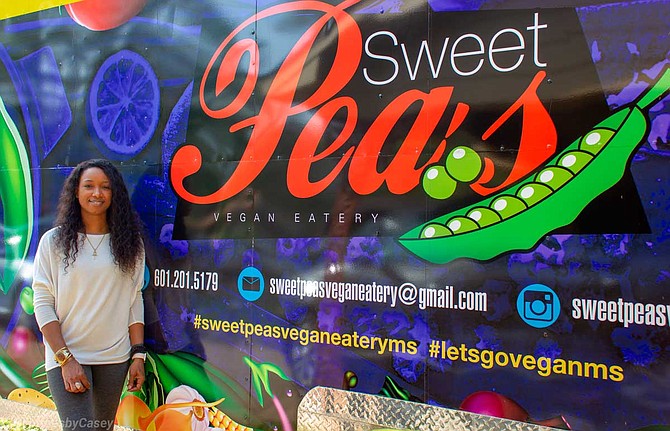 Sweet Peas Vegan Eatery owner Lataurius Rodgers wants her menu to have dishes that are appealing to all—especially people who may not consider trying vegan food. Sweet Peas will open on April 3. Photo by Acacia Clark.

When Lataurius Rodgers first went vegan, she craved hot wings and began seeking out equally satisfying solutions. Then, she found something: "wings" made out of cauliflower.

"I had never been a cauliflower fan before, but this recipe made me fall in love with it," she says.

To make them, she covers the vegetable in batter and seasoning, deep-fries them and then covers them in a sauce like lemon pepper or sesame teriyaki. The dish is part of her new business: food truck Sweet Peas Vegan Eatery.

Rodgers says that while she has always been a healthy eater, becoming vegan was something she never thought she would do.

"I've been conscious about what I ate since I was a kid because my mother and other family members had a lot of problems with weight and high blood pressure, and I wanted to avoid that for myself," she says. "Going vegan, though, was a long process that started with slowly cutting out pork at first, then beef and finally dairy from my diet. Over time, the journey I took to eat better made me realize it wasn't so bad."

Rodgers, who also owns Diamond Nail Studio in Jackson, got her start in the restaurant business in 2001 working as a waitress for her uncle, Charles Smith, at his restaurant, Southern Kitchen in McComb.

She started a home bakery business called Double Trouble Cakes and Sweets in 2008. Her friend, Catherine Hilderson, who owned a business in McComb called Sweet Peas Bakery, also regularly sold cakes and cookies Rodgers made in her shop and hired her as a manager later that year. The bakery closed around 2009. When Rodgers decided to open her food truck, she named it after Hilderson's bakery.

Rodgers moved to Jackson from McComb in 2013. She lives in the Fondren neighborhood with her three daughters, Alayla, Talia and Cameryn, and her son, Denarius.

Sweet Peas Vegan Eatery will feature an entirely vegan menu that Rodgers says is tailored to make vegan dishes more appealing to people who may not normally consider trying them. Sweet Peas will offer familiar foods such as burgers, wings and nachos with vegan substitutions, as well as rice bowls, salads and specialty dishes such as a "kale power bowl" made with kale, quinoa, corn, black beans, sweet potatoes and chipotle sauce.

Sweet Peas will open to the public on Wednesday, April 3. The business will operate in Fondren on the corner of Meadowbrook Road and Northview Drive, across from Trustmark Bank. The food truck is open for lunch Monday through Friday from 11 a.m. to 3:30 p.m. and for dinner Thursday through Saturday from 5 p.m. to 9:30 p.m., though the business' weekend schedule may change. Rodgers is also planning a grand opening celebration for Sweet Peas as part of Food Truck Friday in Smith Park in Jackson on Friday, April 5.