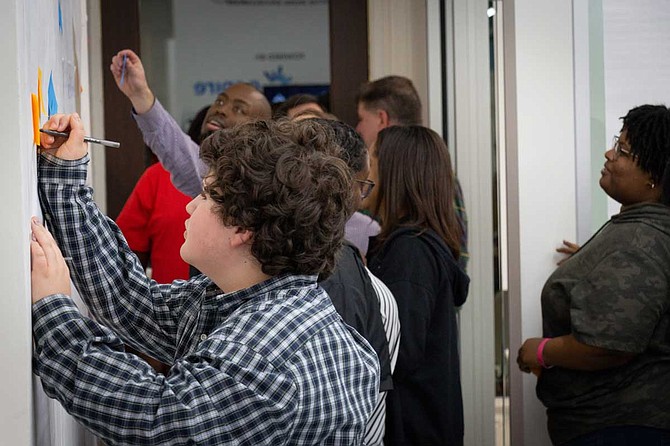 During Startup Weekend March 1-3, entrepreneurs learned what it takes to grow something from an idea into a full-fledged business. Photo courtesy Innovate Mississippi

JACKSON — While some people got off work and headed into a typical Friday night on March 1, about 45 people gathered at Coalesce for an event that would give them an insight into entrepreneurship: Startup Weekend Jackson.

The program, which Andrew Hyde launched in 2007, teaches marketers, designers, developers and more how to build a company. It partnered with Innovate Mississippi in 2012 to bring the program to Jackson. During Startup Weekend, participants go from pitching an idea to developing a prototype to getting customer feedback to making a final prototype and then presenting it.

Participants in this year's program pitched on Friday night. Of the 45 people who went to the event, 25 presented pitches. Then, the crowd voted for six ideas to work on over the weekend.

"This year was really good," said Innovate Mississippi Entrepreneurial Development Director Tasha Bibb. "I really felt like all the groups had members that were completely dedicated, completely engaged."

That night, Entrepreneur-in-Residence Bruce Deer, an engineer who does consulting, program management and more for companies, gave a keynote speech about how the entrepreneurs could use the weekend to dive into the projects, not take "no" for an answer and how to make the projects work, Bibb says.

The participants got down to business on Saturday. Mentors met with the different groups about their markets. But Startup Weekend is not just talking about how to reach a potential market; participants had to go out and do that work, Bibb says.

"We had them actually leave the building, go to malls, go to the farmers market, go somewhere and talk to someone who would be your potential customer," she says, "which was a really valuable experience. It's something that we really push."

The rest of that day, the groups worked on the prototypes and demos to show off during final presentations on Sunday.

Sunday started off with mentors coming in to help the groups with preparing presentations, and making sure they have done enough research on the idea and that they implemented the feedback from customers.

Each group had five minutes to present to the judges, who were Richard Sun, co-founder of the Mississippi Coding Academies and a former entrepreneur-in-residence at Innovate Mississippi; Kristin Ley, the founder and chief executive officer of Thimblepress; Charles "Bubba" Weir, the managing principal of Innovative Ventures of Mississippi; Hartman Holiman, director of the IT Project Management office at the University of Mississippi Medical Center; software developer and The Bean Path cofounder Nashlie Sephus; and Ivan Walker, a software development engineer at Amazon.

In presentations, Bibb says the groups talked about what they learned over Startup Weekend and how the idea evolved after getting market feedback, and then the judges picked three winners.

The third-place winner was LifeCloud Vault, an app that allows users to store legal and personal documents in the cloud; the second-place winner was Trendy Tots, whose idea is to create a "big-and-tall" line of clothing for toddlers who may not fit standard sizes; and the first place winner was My2nd World, whose idea is to create an app for international students that allows them to connect with other international students on their college campus, and share resources and information that is specific to them.

"We all suffered a lot when we came here," Alnakhif, a Yemen native who is a software engineering student at Mississippi State University, says. "We couldn't speak that good English. We didn't know anybody here. We couldn't deal with people. ... We all faced these kind of difficulties when we came here."

Those are some of the most common problems international students all over the U.S. face, he says, so they decided to create a social-media platform that allows them to connect.

The teams received prizes such as marketing consulting from Maris, West & Baker, a provisional patent from Bradley law firm, and temporary co-working space from Mantle and Coalesce, divvied out among the different groups that won.

Though some of the ideas that come out of Startup Weekend may change, some stick and actually gain momentum, Bibb says. For example, J.J. Townsend pitched his idea, Citizenville, which allows people to crowdfund initiatives to help their communities, in 2017. The organization hosted Fondren Gumbo on March 28 and will host West JXN Gumbo on April 28. The events are a chance for people to pitch and fund projects. For more information, visit citizenville.org.

"Entrepreneurship is the driver of economic development and economic success," Bibb says. "Small business create the jobs, and the jobs bring in wages, and ... impact the economy positively in that way. The more small businesses we can create, the better the impact on the economy."

For the My2nd World team, the idea is sticking. Alnakhif says that while the app is still a ways from launching, they are putting more effort toward developing it.

With Startup Weekend's global scale, people who go through the program get connected with those resources and people, so it gives participants access to a much broader network, Bibb says.

Startup Weekend can also be a stepping stone to other programs, such as Co.Starters, a nine-week entrepreneurship program, the New Venture Challenge, in which entrepreneurs can win cash for their startups, and the Mississippi Delta-based startup accelerator Delta I-Fund, which is similar to Co.Starters. Local entrepreneurs can also present at 1 Million Cups, a monthly event that allows businesses and organizations to connect with the community.

"The goal is to progress, to get out of the idea stage, get more market feedback, actually develop a prototype and get ready for launch," Bibb says.