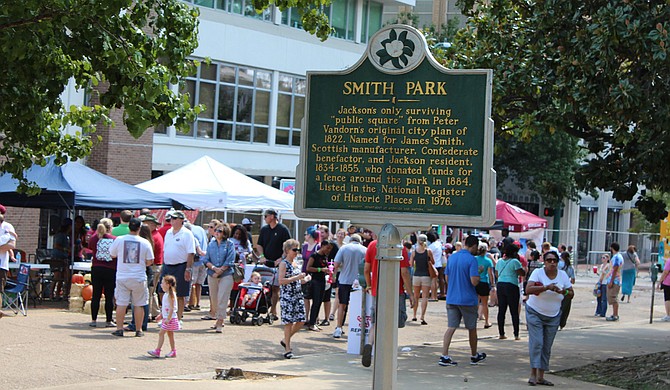 The 2018 BankPlus International Gumbo Festival is Saturday, Sept. 22, at Smith Park from 11 a.m. to 5 p.m. Photo by Ardenland

In one year during the International Gumbo Festival's first iteration in the '90s, Hal White sought to make one of the world's largest pots of gumbo.

"It was so much gumbo that after the festival was over, the pot still looked full," festival organizer Bill Bissell says.

Bissell, White and his brother, Malcolm White (the current executive director of the Mississippi Arts Commission), decided to feed prisoners at the Hinds County jail in downtown Jackson with the leftovers.

"We found something good to do with gumbo, the prisoners had the best meal they'd ever had, and we all had a good time," Bissell says.

But the next day presented a challenge for him: He had to get the pot cleaned out.

"After a night of celebrating getting all the prisoners fed, it was a little bit of a challenge the next morning, but I made it through OK," he says.

Bissell took it to a car wash and says had to get inside of it  to clean it.

"We've never had a pot of gumbo that big again," he says.

"It is a fun food, and gumbo is such a mixture of products and different things," Bissell says. "We (also) had musicians that played around town that wanted to be a part of something."

It ran through 2004 when the major sponsor, Jitney Jungle, left Jackson. After Hal passed away in March 2013, organizers restarted the  festival that fall

For Bissell, picking the festival back up meant giving the city something it needed.

"Jackson had no festival of any consequence that was downtown and in the heart of the city," he says.

Since the festival restarted in 2012, proceeds each year have gone toward the Harold T. & Hal White Memorial Scholarship fund at Hinds Community College. The scholarship goes to a freshman or returning sophomore who is pursuing a degree in culinary arts and hospitality and tourism management from Hinds Community College. In addition to the funds, the scholarship also gives the recipient a chance to intern at a minimum of 20 hours at Hal & Mal's.

"This is pretty unique in that the people that receive the scholarships have to work in the food industry, so they have to kind of earn their way, and this a supplement to help them," he says. "It's got a great cause, and there's so many young people that start out in the restaurant industry, and it's not as simple as washing dishes anymore.

"They have to go through that process and learn how to work and run a restaurant, so they get an education and can go on and be successful like Hal & Mal's was."

The 2018 BankPus International Gumbo Festival is Saturday, Sept. 22, at Smith Park (250 N. West St.) from 11 a.m. to 5 p.m. The event will have gumbo tastings and a cook-off, a kid's area, live music from bands such as Webb Wilder and The Beatnecks and Cedric Burnside, and more. Tickets are $10 in advance, $15 on the day of the event and $30 for a four-pack. For more information, visit jacksongumbo.com or find  the event on Facebook.