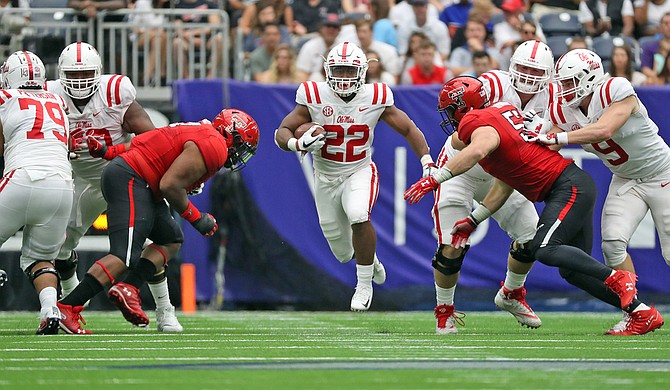 Photo by University of Mississippi Athletics

Heading into the college football season, most experts assumed the University of Mississippi offense would be explosive at quarterback and wide receiver. Quarterback Jordan Ta’amu and the wide receiver unit—collectively known as the “Nasty Wide Outs,”or NWO—didn’t disappoint on Sept. 1.

In the preseason, the Rebels faced two major questions about potential success this season. For one, the defense was a concern and needed to improve if UM wanted to win more than six games.

The other area of concern was the rushing attack on offense. Last season, the Rebels finished 106th in the nation in rushing yards, averaging just 133.9 yards per game on the ground. Adding to the problem, leading rusher Jordan Wilkins left for the NFL.

UM needed Scottie Phillips, who signed with the Rebels as one of the top junior-college running backs in the country, to lead the rushing attack right away. He proved his ranking against the Texas Tech Red Raiders, running his way into the school record book. He needed just 16 carries to amass 204 rushing yards with two touchdowns and an average of 12.8 yards per carry.

Phillips’ first game as a Rebel got off to a rough start with a loss of one yard on his rushing attempt. However, as the first quarter wound down, the Ellisville, Miss., native finally found running room, rushing for 12 yards. Four plays later, he broke off a 39-yard touchdown run that gave the Rebels a 24-7 lead to end the opening quarter of the 2018 season.

Texas Tech found a way to bottle up Phillips and the Rebels rushing attack for the rest of the first half. Then, in the third quarter, Phillips managed a 65-yard touchdown dash to give the Rebels a 17-point lead with just over seven minutes left in the quarter. The run was one yard longer than Wilkins’ longest for the team in 2017.

Phillips helped put the finishing touches on the Rebels’ victory with a 44-yard run, setting up a field goal for a 20-point lead with just over four minutes left in the game. He eased any reservations about the UM rushing attack for at least one week, and the defense held its own in the 47-27 win.

Phillips’ 204-yard game is the first time a Rebel has rushed for 200 or more yards since 2010. Current Miami Dolphin and former UM athlete Brandon Bolden was the last to reach that milestone, amassing 228 yards against Fresno State University.

The former Jones County Community College star also broke a school record for the most rushing yards in a debut game. He is only the eighth running back in Rebels history to rush for 200 yards and recorded the 10th 200-yard performance in school history.

Thanks to his performance in UM’s debut, Phillips is the No. 4 rusher in the nation and No. 2 in the Southeastern Conference. He also earned the title of SEC Offensive Player of the Week.

The official Twitter account for the UM football team had some fun with the junior runnin back’s big game. The account referenced the song “Scotty Doesn’t Know” from the 2004 film “EuroTrip” with the hashtag #ScottieKnows, as well as the hashtag #ScottieToddy as an obvious play on the Rebels’ signature cheer, “Hotty Toddy.”

Phillips will be back on the field this Saturday, Sept. 8, when UM faces the Southern Illinois University Salukis at home in Oxford. The SEC Network will air the game at 3 p.m.