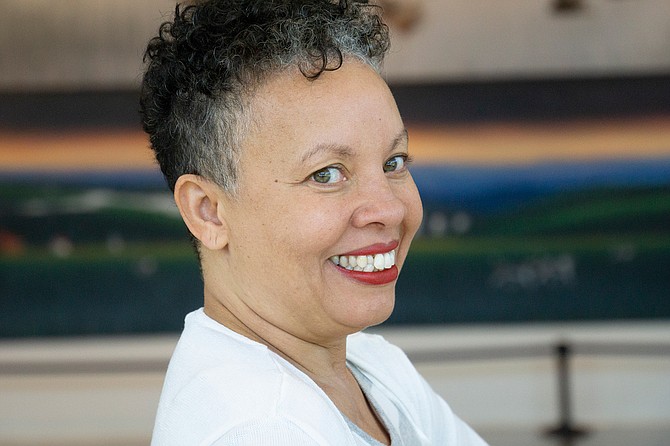 For most of her career, local artist Monique Davis has been centered at the intersection of art and social justice.

The Washington, D.C., native attended Howard University, where she received a bachelor's degree in business and public administration in December 1986. She became a Certified Public Accountant in 1989. From that year to 1996, she worked for National Cooperative Bank.

Melvin had family in Jackson, so while dating, the couple would often travel to Jackson. After he retired early from his position as an installation technician for Verizon Wireless, the couple decided to move here in 2007. They opened Lumpkins BBQ that year, and Davis helped with marketing and running the restaurant until it closed in 2011. She then worked at Catholic Charities as the director of parish-based ministries from July 2013 to December 2014 and as the senior program manager at Parents for Public Schools Jackson from January 2015 to March 2016.

She applied for a job opening at the Mississippi Museum of Art and became the membership director in April 2016. In December 2017, she became the director of visitor and member relations, and the director of participation. When the museum began the Center for Art & Public Exchange in late 2017, she started working with the organization.

When CAPE Managing Director Julian Rankin told museum Director Betsy Bradley that he wanted to take a position as the executive director of the Walter Anderson Museum of Art in Ocean Springs, Bradley recommended Davis to take his place. She will start in her new position on Oct. 15.

In her time at CAPE, she says she has seen more conversations around those issues happening.

For example, civil-rights veteran Hollis Watkins sang a song he wrote after Medgar Evers' assassination in front of Evers' portrait in the "Picturing Mississippi" gallery.

"Then people talked about how that impacted them and the things that they learned that they probably wouldn't have been receptive to necessarily had they not been in an environment surrounded by art and with other people who are experiencing the same thing at the same time," she says.