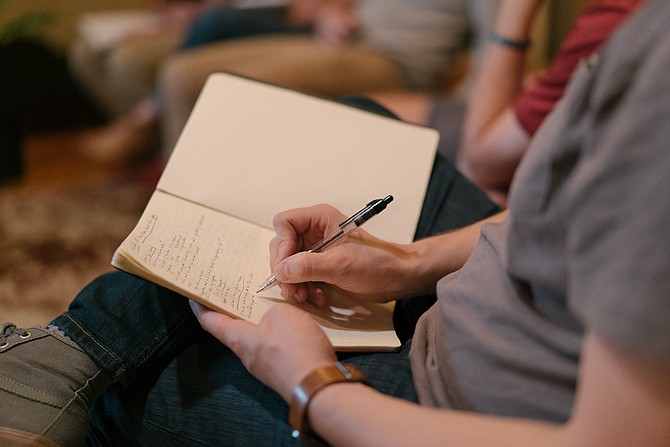 JFP Music Editor Micah Smith partnered with Blue Sky Studios in Jackson for a workshop on how artists should connect with local media on Oct. 1. Photo courtesy Kody Gautier Photo by Kody Gautier

I am not a "bucket list" person, nor do I plan on becoming one.

I have no dreams of skydiving or hitting a homerun in Wrigley Field or meeting The Rock, though if we happen to be hanging out at the same place, that would be kind of cool.   However, if I cared to make a bucket list, then Oct. 1 would have checked off one item for me. I got to lead my first workshop, "Making the Most of Music Media," thanks to BlueSky Studio and owner Casey Combest, who offered to host the event.

For the past two years, I have gone to workshops and lectures at the DIY Musician Conference, which music-distribution service CD Baby held at the Omni Hotel in Nashville both years. But at this past conference, I had an interaction that made me realize that there was information that I really wanted to share.

A Birmingham, Ala., pop artist who I befriended was telling me that she could not decide between two panels taking place at the same time—one focused on how to build a music community in your hometown and another about how to reach out to local media.

"Well," I told her, "I'm local media. I might be able to give you a few pointers on that, at least."

During one of the session breaks, we sat in a conference room, and I started laying out some of the big "dos" and "don'ts" of approaching a media outlet to get coverage. For instance, please don't message me on Facebook and say, "I'm playing tomorrow night; could you interview me and write a story today?" (In all seriousness, that's not a particularly important one, but gosh, is it something I wish would stop happening.)

At the time, I did not feel like I had wisdom to share. I felt like a friend had asked me for advice, and I was just trying to help out. The thing that shifted my view of the situation is when I noticed that, by the end of our conversation, she had a page and a half of notes from what I had told her.

In the back of my head, I had known for some time that I wanted to hold a workshop on connecting with music media. Jackson has so much amazing original music, some of which you'll read about in the annual "Artists to Watch" in this issue (see pp. 14-16). But for some reason, we cannot seem to get the national attention on our arts scene that I think it deserves.

I may not be able to make that happen alone, but I can try to help my peers understand what radio and TV stations, blogs and newspapers like the Jackson Free Press are actually looking for, so that when they venture outside of our city, they'll have some tools to help spread the word.

My desire to try to uplift other artists never made its way onto a formal bucket list, but walking out of the hotel conference room, I remember thinking, "Dang. I guess I would really like to lead a workshop."

Still, with that clear goal, seeds of doubt started sprouting up pretty instantly in the days after the conference. That tinge of imposter syndrome never seems to go away, but I truly believe that can be a sign that you are on the cusp of doing something important, even if, as in my case, it is only important to a few people.

After more than four years in my journalism career, I still have thoughts like, "Well, maybe I don't know enough, yet," or "I cover music for a local paper, not Spin or Rolling Stone—what does anyone care what I know?" I'm a little ashamed to admit that I was worrying no one would show up even as I parked my car at the studio.

And yet on that Monday evening, a handful of singers, songwriters and musicians from all types of music and cities across the state gathered in the mixing suite at Blue Sky and were ready to learn from my experiences.

In the first few minutes, I was also reminded that the imposter syndrome I felt as a newbie speaker hammers everyone who is passionately pursuing something.

Two of the artists I chatted with after the workshop were singer-songwriters from Oxford who had won BlueSky's ticket giveaway and made the drive for the event. Although they both play music in the same city, run in the same circles and attend the same school, they came into the workshop with very different doubts and concerns.

For one of the artists, it was the fact that he had nearly completed his bachelor's degree at the University of Mississippi and felt unsure of the next step. He had been playing music throughout his education, but now that it was nearly over, he was looking for a way to turn it into his career.

"I'm a little worried that I won't know how to do this," he told us.

For the second ticket winner, the problem came when we started discussing the idea of finding a story as an artist. "I grew up in the suburbs outside of St. Louis, Missouri," he said. "I don't think I have one."

And yet, despite the problems that both men brought up, they also sort of presented the answers for themselves.

For the first, there's the fact that he is already playing shows around town and occasionally around the state, and he cares enough to put a conscious effort into his music career. Put simply, often, you just need to do more of what works and less of what doesn't. For the second, it is just a matter of taking the time to develop his story and use it to further express what he was already saying with his music.

We aren't always going to get the "Wizard of Oz" moment. At some points in our lives, it takes an outside force to get us to act, and what's awesome is that we can be that outside force for someone else.

Some people view the fact that Jackson isn't some behemoth metropolis as a negative, but it can actually be a wonderful thing. I can't tell you how many artists and creatives of all kinds have told me how great it is to be in a city where, when you put in the work and try to accomplish something, you can actually see the fruits of that work.

As I said, I still don't plan on creating a bucket list. Bucket lists are made up of things you want to do eventually. Instead, I'm getting started on a list of things that I want to make happen right now, right here in Jackson.