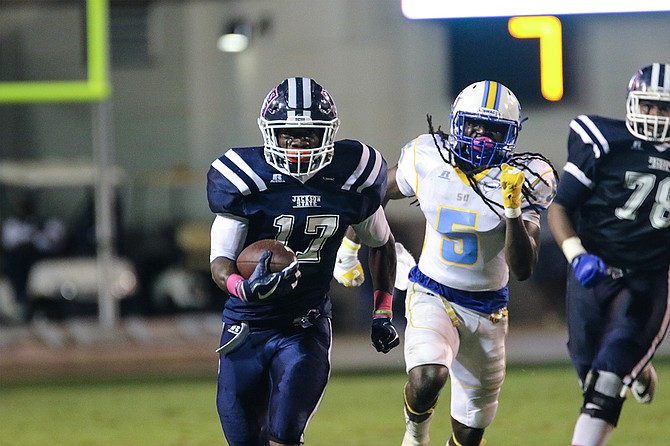 The Jackson State University football team has not won the SWAC East division since 2013, but that could change come this Saturday, Nov. 17.

Since parting ways with head coach Tony Hughes, the Tigers have gone on a two-game winning streak heading into their final game of the season against Alcorn State University. The winner will be the East division champion and earn a spot in the SWAC Championship Game. A victory would be a satisfying ending for a team that has been through plenty of ups and downs this year.

If the Tigers are going to win, they will need former Terry High School star Jordan Johnson in the backfield. The running back left JSU's 34-28 win over Prairie View A&M University with a lower leg injury on Nov. 3, but before the injury, Johnson was having a great day with 74 yards and a touchdown on just eight carries.

The injury caused him to miss the Tigers' 20-2 win over Alabama State University on Nov. 10. JSU having the Terry, Miss., native back on the field could be the key to a division title.

Even after missing the last game, Johnson leads Jackson State in rushing with 546 yards on 94 carries and is fifth in the conference in rushing. He also leads the team with three touchdowns and 66 yards per game, and has been the Tigers' top rusher in six of the nine games this season.

Before the injury, Johnson seemed to be on pace for his best season as a Tiger. As a freshman in 2016, he received 75 carries for 477 yards with two touchdowns. In his sophomore year, he posted 150 carries for six touchdowns and his career-record 647 yards. He is currently 119 yards behind his record from last season.

The running back has improved as a receiver each season, as well. As a freshman, he caught five throws for only four yards. Johnson raised his receiving numbers as a sophomore with nine receptions for 37 yards and his lone receiving touchdown. This season, he has a career-high 19 grabs for 89 yards.

Jackson State have turned to running backs Keshawn Harper and Quitten Brown in Johnson's absence, but neither has more than 300 rushing yards this season.

If the Tigers can control the ball, they can keep the potent Alcorn State offense on the sideline, and Johnson can help do that with his running ability. JSU will likely need him if the team hopes to win a spot in the SWAC title game, let alone a chance at a Celebration Bowl victory.

Jackson State and Alcorn State will take the field this Saturday, Nov. 17, with a 2 p.m. kickoff time. The victor will then play in the SWAC Championship Game, which will air on ESPNU on Saturday, Dec. 1.