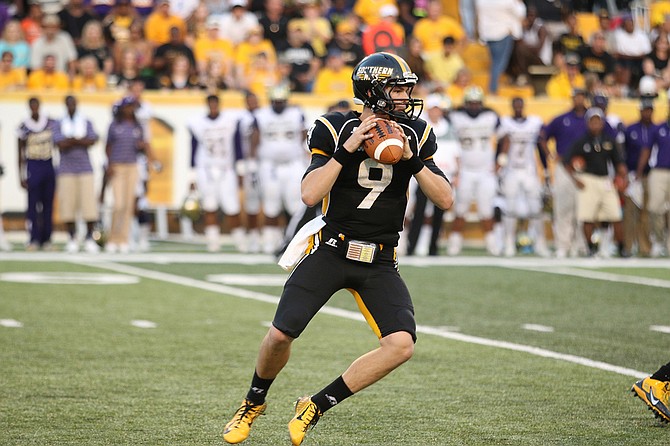 Quarterback Nick Mullens left the University of Southern Mississippi owning most of the school's passing records. He is the career leader in passing yards for the Golden Eagles with 11,994 yards and the season leader with 4,476 yards.

The Hoover, Ala., native also owns USM's season record for attempts, completions and touchdowns, and the career records for attempts, touchdowns and interceptions thrown

When the 2017 NFL Draft came around, no team selected the Southern Miss great, but the San Francisco 49ers signed Mullens as an undrafted free agent on May 4, 2017.

He played in the final preseason game of the 2017 season, completing seven out of 10 passes with an interception and a lost fumble. The 49ers cut the quarterback on Sept. 2, 2017, but brought him back one day later on their practice squad. He remained on the practice squad for the rest of the season.

San Francisco gave him another chance—and more playing time—during the 2018 preseason, as he played in all four games. He completed 31 of 43 pass attempts for 396 yards and one touchdown, but he also had three interceptions and two fumbles.

It was a role he had been preparing for during his time on the practice squad. After signing with the 49ers, he used videos on YouTube to learn new techniques, and he also took the play scripts from games and went onto the field to run the plays by himself. On away-game weeks, the former USM star practiced calling the plays while listening to a screaming soundtrack to simulate crowd noise.

All that preparation paid off when Mullens started against the Oakland Raiders on Nov. 1. His day began with a "good luck" text from Hall of Famer and fellow USM star Brett Favre, and it continued to get better.

On his first drive of the game, Mullens went three for three on pass attempts for 41 yards with a 24-yard touchdown pass, helping the 49ers to a 7-3 lead. He went six for eight on passing on his next drive for 62 yards and a second touchdown.

Before halftime, Mullens drove the team down the field to set up a 39-yard field goal that gave the 49ers a 17-3 lead at the break. He nearly saw his great start take a turn in the second half when he fumbled on San Fransisco's opening play of the third quarter.

He recovered and threw a deep pass for 71 yards on the next play. He capped the drive with a five-yard touchdown pass that gave San Francisco an insurmountable lead at 24-3. The 49ers added another touchdown and field goal on a long run, ultimately walking away with a 34-3 win over the Raiders.

Overall, Mullens went 16 for 22 on pass attempts for 262 yards and three touchdowns. His night was so good that his previously unverified Twitter account earned the blue checkmark during the game.

His first start in the NFL happened to be one of the best in recent NFL history, as well. It helped the 49ers win their second game of the year—and their first since week two of the season.

San Francisco has also named Mullens as the starter for the team's upcoming Monday Night Football Game against the New York Giants on Nov. 12. It will be his second start against a team with one victory. The Giants, much like the Raiders, have one of the worst offenses and defenses in the league.

The game will match up two quarterbacks from Mississippi universities, Mullens from USM and Eli Manning out of the University of Mississippi. ESPN will broadcast with the game at 7:15 p.m.

A strong finish to the season could earn Mullens the backup job behind Garoppolo for the 2019 season or could see the 49ers trading him to a team where he can battle for a starting job. If he falters, a return trip to the practice squad would be the most likely destination for next season.