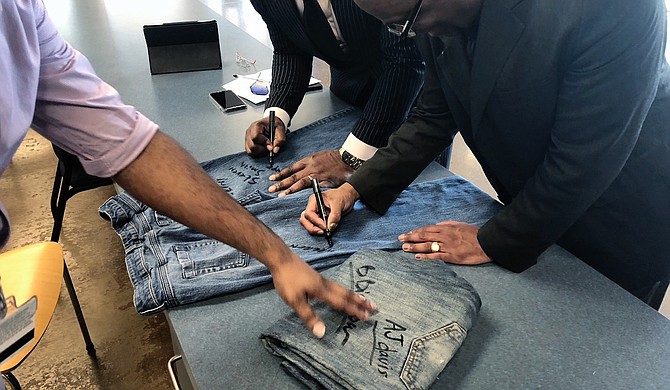 Antonio Horton, a counselor for the Latasha Norman Center and project coordinator for JSU's ONE S.A.F.E. program, encouraged students, faculty and staff to sign pairs of jeans at JSU's Denim Day event to show their support of the campaign. Photo by Jackson State University

Jackson State University's Division of Student Affairs and the Latasha Norman Center for Counseling organized Denim Day on April 25 inside the Student Center to raise awareness about the nationwide issue of campus assault, and to help the university eliminate abuse and make the campus S.A.F.E., or a sexual-assault-free environment.

Denim Day began in 1998 in response to an Italian Supreme Court case in which the court overturned a rapist's previous conviction, claiming the victim wore jeans so tight that she must have helped her attacker remove the denim, thus implying consent. Women in the Italian parliament began wearing jeans and holding placards that read "Jeans: An Alibi for Rape" in protest, and women in the California senate later took up the protest. The Italian Supreme Court reversed its decision in 2008.

JSU's event also coincided with National Sexual Assault Awareness Month in April and aimed to learn students' level of knowledge in regards to sexual assault and violence. Leaders in the ONE S.A.F.E. program conducted a survey to gather feedback from students on how the campus can better respond to victims and received more than 200 responses. It also asked if students know about available resources and the process for handling sexual-assault crimes.

Antonio Horton, a counselor for the Latasha Norman Center and project coordinator for JSU's ONE S.A.F.E. program, also encouraged students, faculty and staff to sign pairs of jeans at the event to show their support of the campaign.

The University of Southern Mississippi invited three veteran educators to serve as grand marshals for its spring 2018 commencements this weekend in Hattiesburg. The first, Gwen Pate, spoke on Friday, May 11, at 9 a.m. in USM's Reed Green Coliseum. Pate has been on the USM faculty since 1981 and has served as the director of the School of Accountancy since 2014. She is set to retire in June this year.

Dr. Janie Butts, interim director of the USM College of Nursing's School of Professional Nursing Practice, will speak Friday, May 11, at 3 p.m. at the coliseum. She has been a member of the USM faculty since 1993, and teaches classroom and online nursing courses at the baccalaureate, master's and Ph.D. levels. She is also the co-author of "Nursing Ethics: Across the Curriculum and Into Practice and Philosophies and Theories for Advanced Nursing Practice."

Dr. Ken Zantow, an associate professor of management in the College of Business at USM's campus in Long Beach, Miss., will speak Saturday, May 12, at 10 a.m. at the Mississippi Coast Coliseum in Biloxi. Zantow joined the USM faculty in 1999.

For more information about the Southern Miss spring 2018 commencement, including links for live streaming webcasts of the ceremonies, visit https://www.usm.edu/commencement.

Tougaloo College will host its fifth-annual Two Rivers Gala on Saturday, May 19, at the Jackson Convention Center (105 E. Pascagoula St.). The black-tie event honors a number of people who have made noteworthy contributions to Mississippi and to the nation, and helps raise scholarship funds for Tougaloo students. The theme of this year's event is "Beacon of Light." The gala will begin at 7 p.m. and will feature a performance from San Francisco-based soul musical group Maze with Frankie Beverly.

The 2018 Two Rivers Gala will also celebrate Tougaloo's upcoming 150th anniversary and honor Dr. Robert Smith, an alumnus and civil-rights veteran who received the Medal of Valor Award from the American Medical Association in 2017. Smith has been president and chief executive officer at Central Mississippi Health Services, originally Mississippi Family Health Center, since its founding in 1963. He is also the co-founder of the Mississippi Primary Health Care Association.