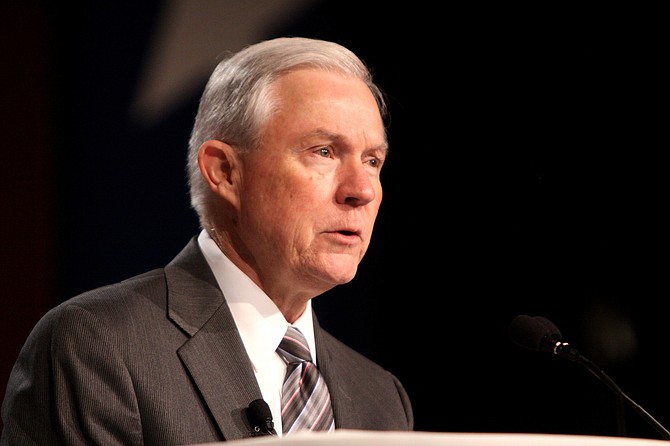 Sessions was one of Trump's earliest and most loyal allies, the first senator to endorse him during the presidential campaign and a key national security adviser during the election effort. Photo courtesy Flickr/Gage Skidmore

The U.S. Department of Justice just released this verbatim statement:

Thirty-five new Assistant United States Attorney (AUSA) positions have been allocated to U.S. Attorney’s Offices along the Southwest border. The breakdown of those positions is as follows:

“The American people made very clear their desire to secure our borders and prioritize the public safety and national security of our homeland,” said Attorney General Jeff Sessions. “Promoting and enforcing the rule of law is essential to our republic. By deploying these additional resources to the Southwest border, the Justice Department and the Trump Administration take yet another step in protecting our nation, its borders, and its citizens. It must be clear that there is no right to demand entry without justification.”

Due to a recent increase in the number of apprehensions at the Southwest border, the new AUSA positions announced today will assist in the prosecutions of illegal reentry (8 U.S.C. § 1326), alien smuggling (8 U.S.C. § 1324), and improper entry (8 U.S.C. § 1325) pursuant to the Justice Department’s “Zero-Tolerance Policy” announced by Attorney General Sessions on April 6, 2018 and its prior April 11, 2017 directive to AUSAs to prioritize charging immigration offenses.

“The Justice Department, under Attorney General Jeff Sessions, has made significant reforms and progress in tackling the overwhelming backlog in the immigration court system,” said EOIR Director James McHenry. “We must not let attempts to undermine our lawful immigration system deter that progress, and the men and women at EOIR are proud to play a small role in the Attorney General’s response to the crisis at our Southwest border.”