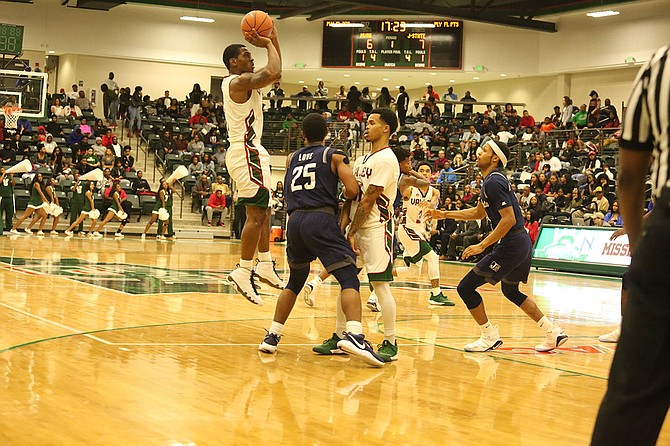 Those who don't follow the action in the Southwestern Athletic Conference closely might be surprised that one of the Mississippi Valley State University men's basketball players made First Team All SWAC in early March. The Delta Devils only won four games this past season and didn't win their first game until Jan. 27.

Athletes from teams that don't win much do not normally receive honors, but MVSU forward Dante Scott earned the votes of head coaches and sports information directors with his play on the court. Scott is the only Delta Devils player to land on the First or Second Team All-SWAC.

The road for him to become an All-SWAC player isn't the typical one for most college stars even in the SWAC. Scott played his first two years of high-school basketball at Campbell High School in Smyrna, Ga., before transferring to IMG Academy, a Florida school known for training athletes such as NFL players Eli Manning, Russell Wilson and Cam Newton, along with former MLS star Landon Donovan and NBA player Michael Beasley.

247Sports.com considered Scott a three-star recruit, but he received most of his scholarship offers from mid-major programs such as George Mason University, the University of Massachusetts and Middle Tennessee State University, among others.

His lone scholarship offer from a major-conference school came from Mississippi State University. Things didn't work out for Scott at the school, so he decided to pay his own way as a walk-on at the University of Memphis.

The forward played one season for the Tigers and saw action in just 10 games and 27 minutes on the court. He went one-for-15 shooting with four points and six rebounds as a freshman in the 2015-2016 season.

After Memphis, Scott's next stop was Howard Community College in Big Springs, Texas. He played in 23 games during the 2016-2017 season, averaging 11.8 points per game and 5.7 rebounds per game, which earned him Honorable Mention in the All-Western Junior College Athletic Conference.

After just one season with Howard, Scott signed with the Delta Devils and made an impact right away for Mississippi Valley State. During the 2017-2018 season, he scored in double-digit figures in all but four games. He scored 20 or more points in six games with a season-high 27 points against the University of Nevada at Las Vegas.

The 6-foot, 4-inch, 220-pound forward led MVSU in scoring average with 14.9 points per game, minutes played at 31.6 per game, was tied for first in rebounds with 5.6 per game and tied for second in assists with 1.9 per game, and was third in blocked shots with nine for the season.

The only other player to receive All-SWAC honors from a school in our state was Alcorn State University guard A.J. Mosby, who earned Second Team All-SWAC.