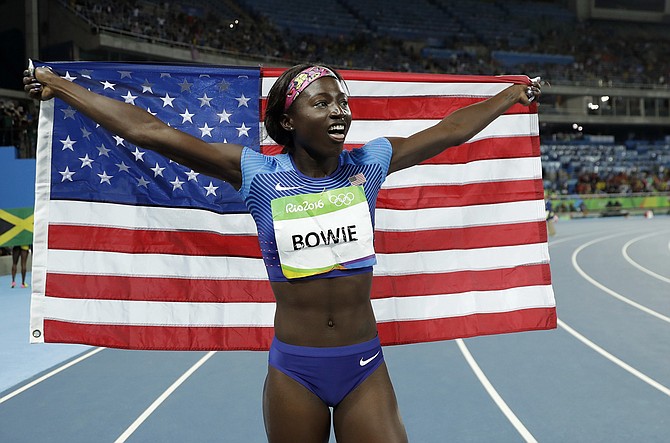 Bowie began her career at the games with a silver medal in the 100-meter dash, added a bronze medal in the 200-meter event four days later, and completed Rio with a gold medal in the 4x100 meter relay.

She continued her rise in the world of track and field during the 2017 IAAF World Championship in London. There, she took the title of "World's Fastest Woman" when she finished the 100-meter in first place thanks to a well-timed lean at the line. Her time of 10.85 seconds gave her a come-from-behind victory over second-place winner Marie-Josee Ta Lou from the Ivory Coast in West Africa.

Sprinting isn't the only thing in which Bowie excels. She recently started to model for adidas' collaboration with Stella McCartney, Stellasport, and the Valentino Resort 2018 campaign. She also appears in ESPN's new "Body Issue," artistically showing the body of a world-class sprinter in a variety of poses.

While the 27-year-old is now one of the premier athletes in her field, she has dealt with adversity throughout her life. At the age of 2, Bowie and her older sister, Tamarra, went into the foster-care system after their mother suddenly decided to give them up. Nine months later, Bowie's grandmother received guardianship of both girls and raised them.

She started to stand out in athletics while on the Pisgah High School basketball team. Her coach made the team run with track and field, and Bowie excelled in sprints and the long jump. She was an All-State athlete in basketball and track, and won a state title twice in the 100-meter, 200-meter and long jump, in addition to three 4x100 meter relay titles.

Success in track and field earned her a scholarship to the University of Southern Mississippi. Her breakout season came in 2011 when she won the national championship in the indoor and outdoor long-jump events.

While she participated in sprinting and field events at USM, Bowie focused on the long jump early in her professional career. This focus changed in 2014 when she finished 13th in Poland at the IAAF Indoor Championships' long jump.

She then decided to shift her attention to sprinting, which started her rise to international stardom. An injury in May 2018 at the Prefontaine Classic kept Bowie from competing in this year's USA Outdoor Track and Field Championships, which took place in Des Moines from June 21 through June 24.

Even with her out for one major event, Bowie has a big few years in front of her. She will compete in the 2019 IAAF World Championships in Qatar and the Tokyo Olympic Games in 2020.