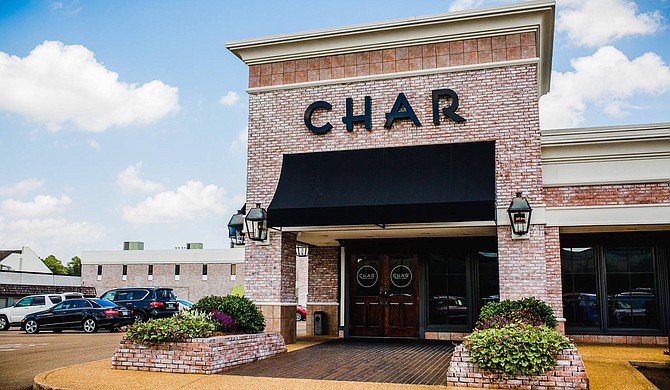 Char Restaurant will celebrate the opening of its new outdoor patio with an event called "Yappy Hour" on Saturday, Aug. 18, from 3 p.m. to 7 p.m. Photo by Char/Facebook

Char Restaurant (4500 Interstate 55 N. Frontage Road) will celebrate the opening of its new outdoor patio with an event called "Yappy Hour" on Saturday, Aug. 18, from 3 p.m. to 7 p.m.

The restaurant is partnering with Hollywood Feed and Austin-based Tito's Handmade Vodka to raise money for animal rescue group Rescue Revolution of Mississippi during the event.

Char will sell a cocktail with Tito's and lemonade during Yappy Hour, donating $1 to Rescue Revolution for each drink sold. Tito's will announce the donation total and match the dollar amount at the end of the event. Char will offer a drink called the Highland Village, which is a Tito's-based cocktail made with orange juice, lemon juice and mint. There will also be regular lemonade available for children.

Yappy Hour will include a raffle to raise money for Rescue Revolution, adoptable dogs in a tent next to the Char patio, giveaways from Tito's and dog goodie bags from Hollywood Feed. The event will also feature a tent for visitors to bring their own dogs.

Char began construction on its new patio in June this year. The patio can seat up to 23 people and is available for reservations by request.

Fair Trade Green, a handicraft store that shared space with the now-closed Rainbow Co-op, recently announced that the store has moved into a new location in Fondren.

"The new space is inside an older home that's been renovated," Puckett told the Jackson Free Press. "It's roughly 2,000 square feet and has more floor space, as well as private on-site parking."

Founders Luke and Charlotte Lundemo opened Fair Trade Green in 2009. The business sells incense, stones and various handcrafted goods, including jewelry, baskets, purses, journals and more. All of the products meet fair trade guidelines, which means that the artisans receive a fair wage, have good working conditions and use recycled or environmentally sustainable materials.

"We bring in fairly traded goods from around the world to help provide financial and ecological support for underdeveloped countries," Puckett said. "To that end, we only buy from fair-trade-certified organizations and co-ops."

Fair Trade Green also operates an on-site lending library that collects books from store members and the Fondren community. Visitors can check out books for free for up to two weeks at a time.

On Thursday, Aug. 2, Fair Trade Green will host an event called the Metaphysical Fair as part of Fondren's First Thursday. The store will set up tents in its front parking area for local artisans, jewelry makers, tarot card readers and more.

For more information, visit fairtradegreen.com or find the store on Facebook.

Families First is a joint program of the nonprofits Mississippi Community Education Center and Family Resource Center of North Mississippi. The organization provides services such as an online high-school diploma program, youth libraries for children, financial literacy programs for adults, and classes on topics such as conflict resolution, nutrition, bullying prevention and workforce readiness.

Families First divided the laptops between the Jackson resource center and another in Tupelo. The organization also operates 21 other centers in the state, including one inside the Jackson Cash & Carry (3250 Terry Road).

The laptop donation was part of UnitedHealthcare's Community Computers project, which the insurance provider created in 2012. UnitedHealthcare donates computers to community organizations and nonprofits to benefit vulnerable populations such as inner-city youth, the elderly and people with disabilities. Since the project launched, the company has donated more than 3,000 computers nationwide.