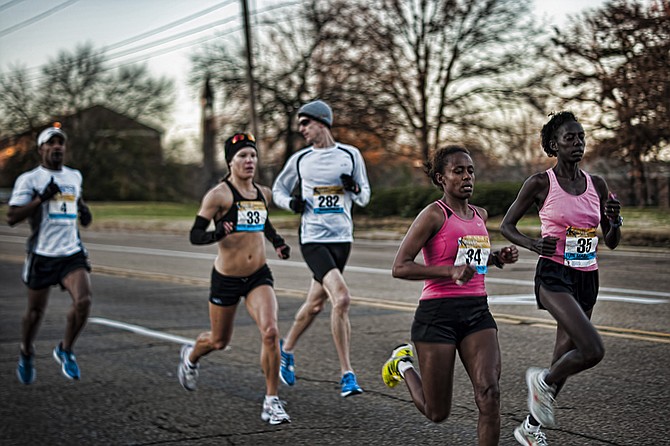 The sound of blues music and sneakers hitting the pavement will fill the streets of Jackson on Saturday, Jan. 27, during the Mississippi Blues Marathon. File Photo

JACKSON — The sound of blues music and sneakers hitting the pavement will fill the streets of Jackson on Saturday, Jan. 27, during the Mississippi Blues Marathon.

This is the 11th annual marathon, as the 2017 event was cancelled due to ice. In years past, the marathon has happened on the second Saturday on January. In September 2017, marathon Director John Noblin announced that the race would move to the final Saturday of the month and that Blue Cross Blue Shield of Mississippi would step down as the presenting sponsor. Continental Tire of the Americas signed on as the sponsor for the 2018 marathon.

"We approached Continental about becoming our new sponsor this summer because, with it being an international company that's new to the area, we figured they would have the resources and that this would be a good way for them to align themselves with the community," Noblin told the Jackson Free Press in September. "I think this sponsorship will make for a good introduction to Jackson."

Runners can pick up their race packets on Friday, Jan. 26, from 9 a.m. to 7 p.m., with extended hours from 7 p.m. to 9 p.m., at the Jackson Marriot (200 E. Amite St.). Packet pickup on race day begins at 6 a.m. in the Mississippi Museum of Art (380 S. Lamar St.), though marathon organizers encourage runners to pick up their packets before the day of the race.

All races in the marathon will begin and end at the Art Garden at the Mississippi Museum of Art with a start time of 7 a.m.; however, those with physical disabilities can begin running at 6:50 a.m.

The event's course will take runners through Jackson. The half marathon will change course past the seven-mile mark at Ridge Drive. The "Quarter Note" quarter marathon will cover the first 4.5 miles and the last two miles of the full and half marathons. The race also includes a five-kilometer course, which will cover the first 3.1 miles. The relay will consist of five-person teams that will run four five-mile legs and a final 10-kilometer leg. The course will be marked with exchange zones at mile five, mile 9.9, mile 15.2 and mile 20.1.

The Finish Line Festival at the Art Garden will have live music, food, beer, soda, activities for kids and more. Runners can also receive post-race massages, which will begin at 9 a.m. The festival is open to the public.

While there will not be an official Blues Crawl due to the limited number of participating venues, there will be music from Jamell Richardson at Underground 119 (119 S. President St.), Jonathan "Boogie" Long at The Iron Horse Grill (320 W. Pearl St.), and Cary Hudson at Hal & Mal's (200 Commerce St.). There is no cover charge for the latter two events, and race participants with a marathon bib or medal will not have to pay the cover at Underground 119.

For more information on the Mississippi Blues Marathon, visit msbluesmarathon.events.