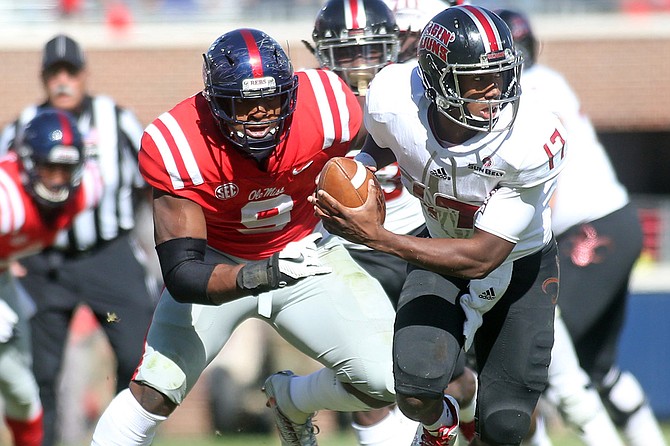 Another player is leaving the University of Mississippi football team. This time, however, it is not a player transferring to another school due to the recent NCAA sanctions against the program.

Defensive end Breeland Speaks is forgoing his final season with the Rebels to enter the 2018 NFL Draft. Before playing for UM, he was a standout athlete at Callaway High School.

During his junior season at Callaway, Speaks played middle linebacker and led the team in tackles with 136, nine tackles for a loss and five forced fumbles. He was named All Metro as a junior.

He transitioned to defensive tackle in 2013, his season year, and recorded 118 tackles, 26.5 tackles for a loss, 18 quarterback hurries, nine sacks, five pass breakups, four forced fumbles, three blocked kicks and an interception returned for a touchdown. His results on the field helped Callaway win a school-record 14 games and advance to the semifinals of the 5A playoffs.

That year, he was the Class 5A Defensive Player of the Year, a First Team All-State defensive tackle and All Metro, and he played in the Alabama-Mississippi All-Star Game. Sports media considered the Speaks a four-star recruit and one of the best defensive-tackle recruits in the nation. 247Sports.com had him rated at No. 11, Scout.com had him at No. 19, and Rivals.com had him at No. 12 at defensive end.

Speaks was a member of the Rebels' 2014 signing class but redshirted during his first season in Oxford. In 2015, he played in every game as a defensive tackle with two starts and had 32 total tackles, 14 solo tackles, 5.5 tackles for a loss, two defended passes, one sack and one fumble recovery.

His production dropped a bit in the 2016 season, as he had just 28 total tackles, 11 solo tackles, eight quarterback hurries, 1.5 tackles for a loss, one defended pass and one sack. He played in every game and made seven starts.

This past season, Speaks moved from defensive tackle to nose tackle and defensive end, and he had his best season with the Rebels. He started in all 12 games and made 67 total tackles, 27 solo tackles, eight quarterback hurries, eight tackles for a loss and seven sacks. He also forced one fumble, had one fumble recovery and defended one pass. His efforts earned him Second Team All-SEC honors from the Associated Press and Phil Steele.

WalterFootball.com has a third- to fourth-round grade on Speaks at defensive end early in the draft process. TheDraftAnalyst.com places a third-round grade on him. He can help his status through showing that he is valuable in several positions along the defensive line, though.

NFL teams love to pick up versatile players in the middle of the draft. If Speaks can play both defensive end and defensive tackles, he increases the likelihood of a team drafting him. If he can fit into both a 3-4 and 4-3 defense, it adds even more to his draft stock. Even if he is a third- or fourth-round pick, that will help him get a second and hopefully more lucrative contract quicker.

NFL scouts will wonder how Speaks would have played during the 2018 season without senior defensive end Marquis Haynes opposite him, and if his jump in results was just a byproduct of Haynes getting more attention from opposing offenses. Scouts will also want to know why his production dipped in his second season on the field.

Speaks can make or break his draft stock if he gets an invite to the NFL Combine and at the Rebels' Pro Day later this spring.