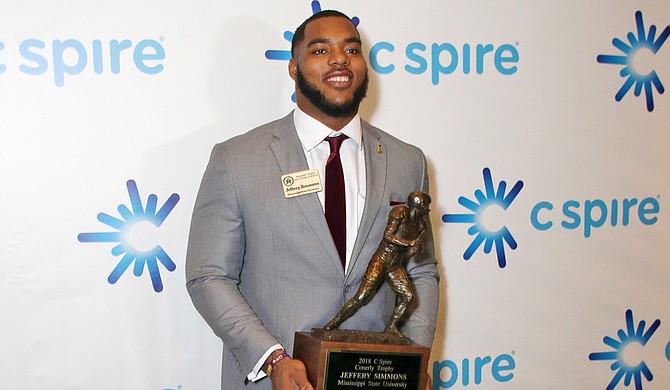 People had high expectations for Jeffery Simmons as a five-star recruit out of Noxubee County High School. The defensive tackle was the top football player in Mississippi, and Scout.com ranked him as the 10th overall player and second-best defensive end in the nation.

Simmons committed to Mississippi State University and became one of the biggest recruits whom former head coach Dan Mullen signed to the team. However, Simmons' journey to the Bulldogs almost never happened after a video surfaced of him striking a female student who was fighting with his sister in March 2016. MSU officials ultimately allowed him to attend the university, but suspended him for one game and made him undergo counseling.

He instantly did well on the field as a freshman in the 2016 season. In limited playing time, Simmons notched 12 solo tackles, 40 total tackles, three tackles for a loss, two defended passes and two forced fumbles. He also earned SEC First-Year Academic Honor Roll and SEC All-Freshman.

The Macon, Miss., native followed up a solid first year with an outstanding sophomore campaign. He led the nation in kicks and punts blocked with three, and returned two of those blocks for touchdowns. Simmons posted 21 solo tackles, 60 total tackles, 12 tackles for a loss, five sacks, two fumble recoveries, two forced fumbles and one defended pass. Those efforts earned him SEC Defensive Lineman of the Week honors twice and First-Team All-SEC.

Before the 2018 season, Simmons was named Preseason All-American and was one of the top college-football players in the nation heading into what could be his final season at MSU. He may declare for the 2019 NFL Draft now that he is three years out of high school.

Without a doubt, Simmons lived up to the preseason hype with his play on the field. He had 24 solo tackles, 59 total tackles, 15.5 tackles for a loss, four defended passes, one sack and one forced fumble. His performance in the Egg Bowl earned him SEC Defensive Lineman Player of the Week. Conference coaches and the Associated Press also named him First-Team All-SEC.

He recently brought home some hardware, as well, winning the 2018 Conerly Trophy. No MSU player has won the award since Dak Prescott in 2014 and 2015. Simmons is the eighth Bulldog to win it and could join several past winners who have gone on to play in the NFL.

He beat out Conerly Trophy finalists from the other four-year colleges and universities in the Mississippi to win the award, including the 2017 winner, University of Mississippi wide receiver A.J. Brown, who was a finalist again this season.

Simmons was the top vote-getter in the fan poll, receiving 13,894 votes, or 10 percent of the votes. His teammate, Elgton Jenkins, took home the Kent Hull Trophy, which the best offensive lineman in the state receives.

If Simmons does decided to leave for the NFL, fans will get one last chance to see him play for MSU again when the Bulldogs meet the University of Iowa Hawkeyes on New Year's Day in the Outback Bowl. The game will air on ESPN2 at 11 a.m.