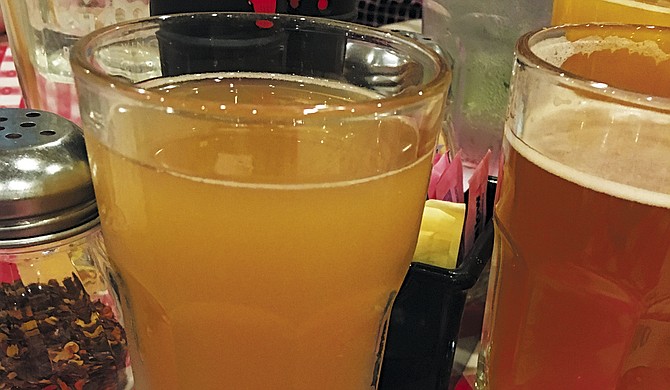 Though Sal & Mookie's New York Pizza & Ice Cream Joint was closed to the public on Monday, Aug. 6, it was filled with people and food all the same. The room was buzzing with conversation as people talked and laughed, waiting for the Chandeleur Island Brewing Company beer dinner. When the first beer hit the table, the festivities had officially begun. The underlying theme of the night? Tropical flavors. Here are a few of the dishes and their paired beers from the dinner. 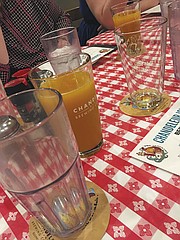 Drinking this beer was like getting punched in the face with citrus, which, in this case, was definitely not a bad thing. It almost tasted like a more tropical-flavored screwdriver, with notes of lemon and orange, and it also had that trademark burn that screwdrivers often have. 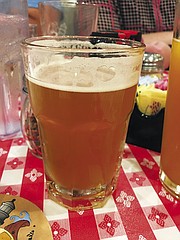 To make this dish, BRAVO! Italian Restaurant & Bar Executive Chef Dan Blumenthal marinated chicken wings in yogurt and tandoori spices (named for the tandoor, a cylindrical metal or clay oven that can get up to 900 degrees Fahrenheit), and then grilled them. The wings were smoky and tasted slightly different than American wings, and the Raita, a yogurt-based sauce, contrasted well with it. The beer, Lil' Smack IPA, had a strong, fruity flavor that was a nice complement to the dish. 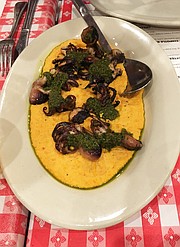 Beer goes with almost everything, this dish at the Chandeleur dinner included. The salad, which had fresh mozzarella, pistachios, sweet red onions and a tangerine vinaigrette, mellowed out the strong, tangy flavor of the beer. The beer's tangy taste helped highlight the citrus notes in the dish.

The ale was light and carbonated, and reminded me of something you would drink while on the beach somewhere. The pizza, which had summer corn, red onion, mozzarella, sharp cheddar and cilantro, had a slight spiciness from the chipotle, and also smoky flavors. The beer tasted slightly sour with the pizza, cutting through some of the sweetness of the barbecue sauce.

Piggy-backing off the smokiness of the pizza was the grilled octopus with a red-bell-pepper hummus, which, for those unfamiliar with the cephalopod, made eating the dish a little less intimidating. The smoky notes of the octopus balanced out the hoppy flavor of the IPA.

Those who are unfamiliar with the world of beer may be a little thrown off by the pineapple wheat ale's sweetness. It tastes like alcoholic Kool-Aid (definitely not a bad thing) and may give you visions of palm trees, sand and waves crashing on a shoreline. The cake's minty, nutty and sweet notes mellowed out the beer, bringing out more of the citrus notes.