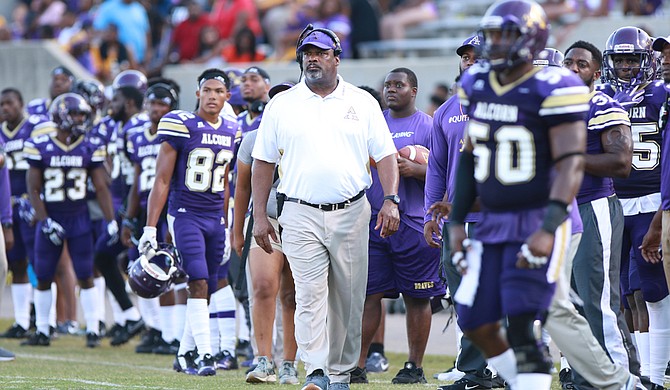 Alcorn State should have a reload season instead of a rebuild. The Braves have 11 Preseason All-SWAC players. Only Grambling State University had more selections. First Team Preseason All-SWAC quarterback Noah Johnson  returns this season with Preseason Offensive Player of the Year P.J. Simmons to run the ball.

The offensive line should be good, as well, with  offensive linemen Mustaffa Ibrahim, Deonte Brooks and Kevin Hall helping to open holes in the running game and  provide quarterback protection. Linebackers Trae Ferrell and Solomon Muhammad should lead in organizing the unit. Defensive lineman Sterling Shippy will be the focus, with defensive back Brady Smith leading the secondary.

Out of conference, Alcorn will probably struggle in the opener at the Georgia Tech but could have some success later in the season against New Mexico State University. In conference, ASU plays the predicted top three out of the West: GSU, Southern University and Prairie View A&M.

The Braves are the favorite to win the East for a fifth year in a row. ASU might not leave as many wins on the table this season, but seven wins is still possible.

After last season, Mississippi Valley State University cut ties with head coach Rick Comegy in November 2017. It was not an unexpected move, as he had a 6-38 record in his four seasons at the helm of the program.

MVSU named Vincent Dancy as interim coach before giving him the full-time position in December 2017. He inherits what might be the toughest job in college football. The team has not had a winning season since its back-to-back successes in 2005 and 2006.

However, the Delta Devils do have something that rival JSU does not: Preseason All-SWAC players, such as star receiver Quinn McElfresh. MVSU will be better if the offense can become more consistent. The team used three quarterbacks last year and couldn't run, finishing with negative-103 rushing yards.

Early in the season, the offense could be the strength of this team. Mississippi College has eight starters returning, including quarterback Ty Jobe and running backs Tiberias Lampkin and Alizee Chubb. While the offense remains mostly intact, the defense will need to rebuild quickly, as the Choctaws have only three starters returning from the previous season's defense.

Gulf South Conference officials picked MC to finish eighth in the competitive Division II conference, which presents the Choctaws tough games each week. MC will be able to improve its win total if the defense comes together quickly, though.

Some fans and sports media might think that Delta State University overachieved last season after Gulf South Conference officials picked the Statesmen to finish sixth in the conference. Instead, DSU finished third and reached the playoffs. This season, GSC preseason polls predicted the team will finish in fourth place.

Replacing running back Chris Robinson will be the biggest challenge for the Statesmen. Returning players on offense, such as quarterback Breck Ruddick and wide receivers Dillon Helm, Leon Green and Tyler Harrell will have to step up their production while another player prepares to take the lead on the rushing front.

On defense, DSU returns linebacker Ovenson Cledanord to lead a strong unit, with Chandler Ector and David Herrington. The Statesmen will need a big season out of defensive linemen Tramond Lofton and Eric Sadler.

DSU has only had one losing season under Cooley and should be in the mix at the top of the conference. The Statesmen will have to sneak up on a couple of the top teams to reach the playoffs again but should finish with a winning record.

Millsaps College will not have to make vast improvements from last year in order to score more wins. The Majors  averaged 22.1 points per game last season but gave up about 26.8 points on defense. Just a touchdown more per game, and the Majors could have broken out of their three-wins-a-season funk. The biggest difference is getting better in the passing game on offense and defense.

Quarterback Chance Clowers should return this season after playing in six games last year. His development could be the difference in win total. On defense, most of the young secondary from last season should be back along with top three leaders in interceptions return.

Managing the schedule will be the key to a good season, with back-to-back road trips twice. If the Majors can just hold court at home, they will end up with five wins. Millsaps could be close to a breakthrough season with some better results in the passing game.

Former head coach Hal Mumme was known for producing offensive results, but his teams fell short on defense. Last season, the Blazers scored 28.4 points per game but gave up 48. Fixing the defense should be the first thing that new Belhaven University head coach Blaine McCorkle works on this season.

Another necessary fix will be the running game. Last season, the Blazers only averaged 57.7 rushing yards compared to 387.6 passing yards, making for a one- dimensional attack plan. Meanwhile, the defense can get some work in against the run. Belhaven gave up 227.3 yards per game on the ground last season.

Belhaven can set the tone for the season by winning its first three home games, but to the new coaching staff, wins won't be as important as setting a foundation.

Taking the next step as a program means playing closer games, even in those losses. This could be the season that the Bulldogs take another leap as a football program. After finishing fourth in the North division last year, Holmes will try to climb the conference ladder once again this year.

The community colleges in Mississippi have some of the best football programs in the country at their level.

Holmes will be tested week in and week out, but posting a third consecutive winning season is attainable and impactful for the program.

Everything could have fallen apart for Hinds after Gene Murphy stepped down as head coach before the first game of last season. Instead, the Eagles stayed strong for a majority of the season.

The final three games did end in losses, but with everything going on before and during the season, new coach Larry Williams did an outstanding job. Now the question will be, "Can he keep it up and return this team to the postseason?"

As long as the Hinds Eagles do not bottom out, all five of those games should be wins. In a 10-game schedule, fans can expect more than five wins from this team, as it makes a push for the postseason again.