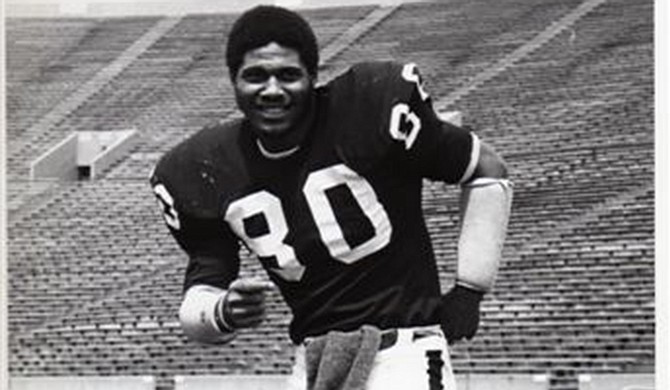 When people discuss the greatest outside linebacker in professional football history, former New York Giant Lawrence Taylor is often near the top of the list. However, one could make the argument that linebacker Robert Brazile paved the way for Taylor.

The Houston Oilers drafted Brazile out of Jackson State University with the sixth overall pick in 1975, picking him two spots behind JSU teammate Walter Payton, who went to the Chicago Bears.

Former Oilers head coach Bum Phillips quickly put Brazile into the starting lineup of his 3-4 defense. Before his death in 2013, Phillips stated that it was Brazile, not Taylor, who made teams want to switch from 4-3 defenses to the 3-4 defense.

The linebacker was a perfect fit for the 3-4 defensive scheme, and could rush the passer and stop the run equally. He played in the NFL for 10 seasons and started in 147 consecutive games, never missing a game during his pro career.

He was the 1975 Associated Press Defensive Rookie of the Year and a five-time All-Pro from 1976 to 1980, and was selected for seven straight Pro Bowls from 1976 to 1982 and the NFL 1970s All-Decade Team. The former Jackson State star is the only linebacker on that All-Decade squad not to be in the Pro Football Hall of Fame.

Brazile, whom teammates called "Dr. Doom," recorded 1,281 tackles, 13 interceptions and 48 sacks, but the NFL only counts 11 of those sacks since the league didn't officially track that statistic until 1982. The linebacker retired after the 1984 season following the death of his wife, Cookie, who died in a car accident.

The rise in major media of Taylor and Brazile's sudden retirement resulted in many people overlooking his accomplishments. As fellow players and coaches of the era start to pass away, it will be only matter of time before his feats become lost to time.

In his youth, the Mobile, Ala., native was a star player at Vigor High School and was the 1971 Alabama All-Star Game Defensive MVP. He decided to attend JSU at a time when the Tigers were a major force on the gridiron. He started his college career at tight end before switching to linebacker as a sophomore and becoming a legend at the university.

Brazile set a school record with 129 solo tackles, led the Southwestern Athletic Conference with nine interceptions, was named to the First Team All-SWAC and First Team All-American, and took part in the Senior Bowl during his senior season of 1974. He helped Jackson State win two SWAC Championships in 1972 and 1973, and the Tigers had a 30-10-1 record during his time there.

After he retired from the NFL, Brazile returned to Mobile to teach special-needs children. He also became a part-time high-school and semi-pro football coach.

On Aug. 24, the Pro Football Hall of Fame named Brazile and former Green Bay Packers offensive lineman Jerry Kramer as senior finalists for the 2018 class. A 48-member committee will vote on Kramer and Brazile, with each player needing 80 percent of the vote to be inducted.

The 2018 class will be announced on Feb. 3, the day before Super Bowl LII. This is the perfect chance for the committee to fix two glaring omissions in the annals of football history.