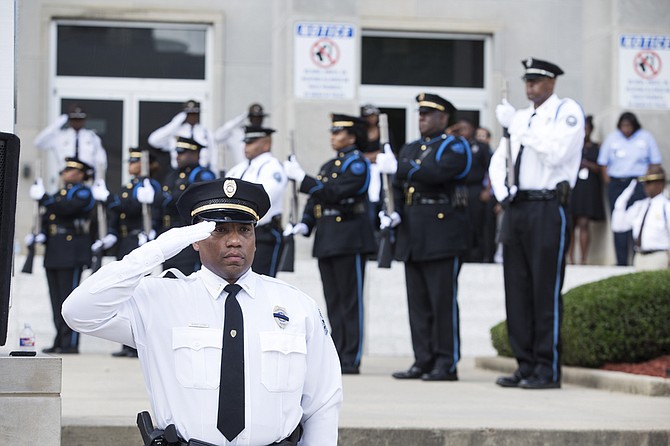 The memorial service program ended with seven officers shooting their ceremonial rifles towards the sky in a 21-gun salute in honor of the fallen officers. Photo by Imani Khayyam.

On the same day that tragedy struck Jackson with the brutal murder of 6-year-old Kingston Frazier, members of the Jackson Police Department and family members came together in downtown Jackson to honor fallen officers.

The annual Police Memorial Service was already scheduled in front of JPD headquarters before news of little Frazier's kidnapping and death left the city mourning. The ceremony was a haunting reminder that officers both deal with horrible tragedies and can die in the line of duty, leaving suffering families behind.

"After all, it was y'all who had to live without a husband, without a father, without a sister, without a brother," said Chief Lee D. Vance told the families of those fallen officers. "We try every year to make sure that we can come up with a tribute that's worthy of the services that they made."

Seventeen Jackson officers have died in the line of duty here from January 1893 through July 2013.

Vance said such occasions such as the memorial service always remind him of Patrolman Bobby Joe Biggert, who was the first officer he served with to die on the job. Biggert was off-duty when he tried to interrupt an armed robbery by Kenneth Davis of a south Jackson pawn and bait shop in 1989. Davis shot the 20-year veteran in the head, and was later sentenced for execution. Davis died on death row in 2014 of natural causes.

"You never know that that's going to be the last time that you're going to get an opportunity to talk to somebody, so it's also a lesson for us who are left behind on how we must learn to treat each other," Vance said.

JPD Lt. Alfred Cooper presented the name of each fallen officer as their families were honored. Family members walked up to retrieve a rose and place it upon the monument in front of JPD headquarters.