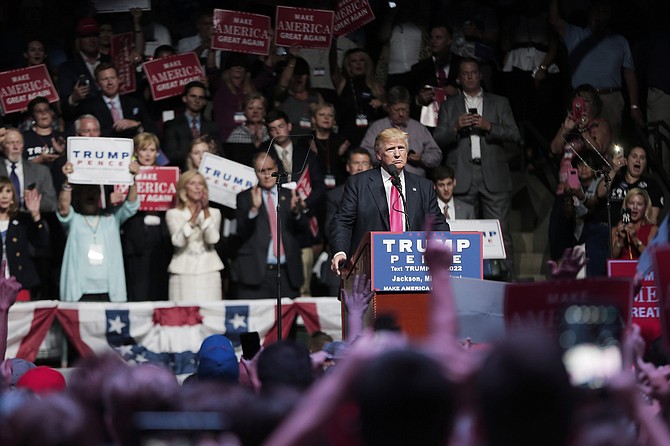 President Donald Trump has proposed to cut all community development block grant funding, which would significantly affect poor communities in Jackson and Mississippi as a whole. Photo by Imani Khayyam.

The state could suffer the loss of Community Development Block Grants because Trump's budget proposes a $6.2-billion cut from the U.S. Department of Housing and Urban Development, which houses the CDBG program. HUD is facing a 13.2-percent decrease from the level of funding for this year under Trump's plan.

In March, the new president announced his budgeting blueprint that proposed $54 billion in cuts from 62 federal agencies and programs.

Henderson emphasized that the 1-percent sales tax does not fund all the city's drainage and street needs, as well as other vital services.

"Our parks would not be able to be maintained. We wouldn't be able to help the homeless individuals," Henderson told the council.

The outcome of the grant termination would affect the many poor families and communities around the globe, who are surviving due to CDBG funds. The program has helped fund low- and moderate-income areas for approximately 43 years, dating back to the Community Development Act of 1974.

Angela Grayson, executive assistant to Yarber's chief of staff, Jackie Anderson-Woods, read the proclamation in the mayor's absence. "[B]e it resolved," the resolution read in part, "that the City of Jackson opposes any attempts to eliminate the programs and urges Congress to recognize the outstanding work being done locally and nationally by CDBG and HOME by supporting increased funding for both programs in FY18."

Henderson closed her presentation with a call-to-action: "It's going to affect us in a great way. Let us not sit back silently and say and do nothing.

"Please support us by contacting your local representatives, your congressmen, your senators, and tell them to vote no on the elimination of CDBG and HOME Programs."

U.S. Sen. Thad Cochran, R-Miss., and Roger Wicker, R-Miss., both are in favor of CDBG grants. When the City of Gulfport and the Gulfport-Biloxi International Airport were awarded $3,893,247 in federal grants for the community, Wicker said in a statement that he was "pleased that we are working to enhance our Gulf Coast with these federal grants."   An additional $581,068 grant went to the City of Gulfport to support community-development projects near the Gulfport Job Corps Center.

However, Wicker also voted in 2015 in favor of the "Stop Sanctuary Policies and Protect Americans Act," S. 2146, to limit federal funding to cities that refuse to use local law enforcement to enforce federal immigration policies.

Trump signed an executive order in January to pull back federal funds from cities that refused to help with immigrant arrest and deportation. William H. Orrick, a federal judge in California, ruled last week that Trump's executive order is unconstitutional, however.

Ward 5 Councilman Charles Tillman said he supports maintaining the CDBG and HOME Program because he has seen them make children safer.

"I had the opportunity to get a piece of this money (and) participate in this program when I was principal at Rowan Junior High School. Half of the student body lived across the railroad track, and safety was a big, big issue," Tillman said at the council meeting.

"We got CDBG money to build that crosswalk, and I will forever be grateful for this program and the community, especially the parents who had students that had to cross the railroad track."

On Sunday, April 30, Congress passed a budget that did not include Trump's cuts to HUD funds, but that budget could be revised as soon as May 5 and will expire by September.