What Do You Know About Being Green? | Jackson Free Press | Jackson, MS

What Do You Know About Being Green? 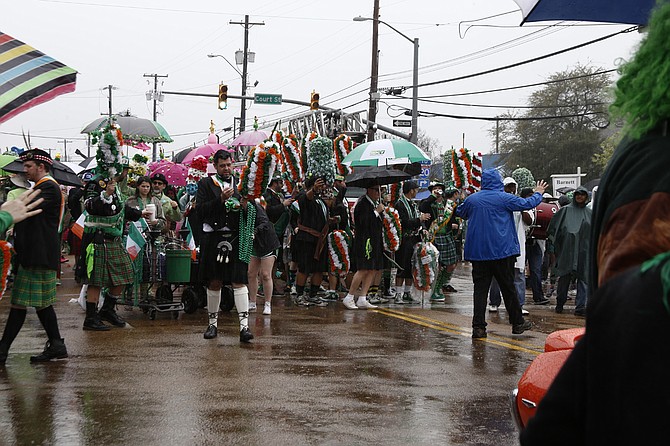 This year’s Hal’s St. Paddy’s Parade & Festival is on Saturday, March 18—led, as usual, by the O’Tux Society. Photo by Imani Khayyam.

It's time for the annual Hal's St. Paddy's Parade & Festival. To make sure you get where you want to be, when you want to be there, the Jackson Free Press wanted to provide a helpful guide for the day's festivities. Here is a run-down of what to expect.

Hal & Mal's Second Line Stomp will be at Cathead Distillery (422 S. Farish St.) on March 17 beginning at  3 p.m. Epic Funk Brass Band will lead a march to Hal & Mal's at 7 p.m. The event will have food from the Mississippi Bacon Association, drinks from Hal & Mal's, beer from New Belgium Brewing and golf-cart transportation from Ladd's Rentals.

Floats will line up at the corner of State and Court Streets to prepare for the parade launch.

Participants can compete to get awards in single-person categories, such as the overall best time for male and female racers, or for team awards, such as the largest team, fastest open team and best team costumes. The entry fee for the race is $30 through March 16. For more information, find the race on raceroster.com.

The children's festival and parade begins at 9 a.m. in the area around the Mississippi Museum of Art (380 S. Lamar St.). Inky the Clown will be the master of ceremonies.   For the event, children are encouraged to dress up and show off their costumes for the parade. The children with the best costumes will receive awards in three categories: creativity, originality and performance. The ceremony follows the parade on the steps of the Russell C. Davis Planetarium (201 E. Pascagoula St.).

After the children's parade, pets get their own time to shine. People are encouraged to dress their pets up in costumes to participate in the parade, which will raise money for the Mississippi Animal Rescue League. Like in the children's parade, the best-dressed pets will get awards in creativity, originality and performance, with a ceremony at the Russel C. Davis Planetarium following the parade.

This is the event you've been waiting for. Stand along the streets of downtown Jackson and watch as the floats, walkers and other spectacles pass by. Keep a special lookout for the Mississippi Band of Choctaw Indians, who are this year's grand marshals.

After the parade, St. Paddy's partygoers can enjoy the music, food and drink vendors, and plenty of other festivities over at Hal & Mal's (200 Commerce St.). This year's festival will feature performances from three acts: Mustache the Band is the self-professed "world's greatest '90s country party band," known for its take on hits from country icons such as George Strait and Brooks & Dunn; Freedom is a funk band that first formed in Jackson in the 1970s and is known for songs such as "Get Up and Dance"; and the Molly Ringwalds are a '80s tribute band that covers hits from artists such as Duran Duran and Guns N' Roses. The gates open at 1 p.m., and admission is $10. The event is for ages 18 and up.