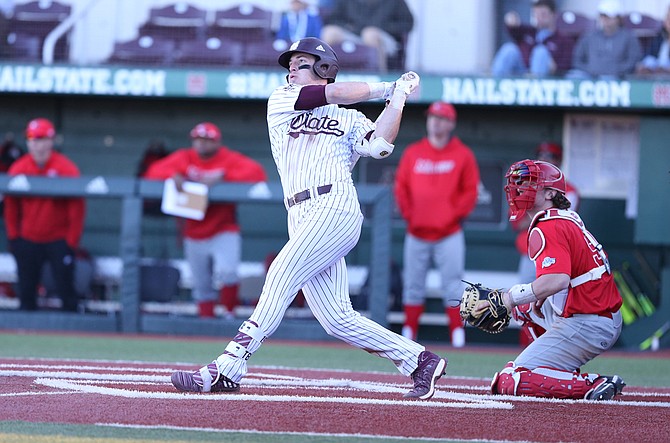 Mississippi State University outfielder Brent Rooker was in the zone last weekend in the batter's box. The ball must have looked like the size of a cantaloupe each time he came to the plate.

On Friday, Feb. 25, Rooker went four for four in batting in an 11-6 win over Indiana State University. In the game, he hit two home runs and two doubles, driving in eight runs. He is the first Bulldog to do that since April 6, 2010.

His bat stayed hot the next day against Marist College in a 12-4 win, as he went four for four again with another home run and double, and drove in six runs.

Last week, Rooker went 9-19 at the plate for a .474 batting average, hitting three home runs, three doubles for 14 runs batted in. He also added five stolen bases for the week, which gave him a perfect eight for eight in steal attempts this season after going two for three in his last 93 college games.

His work at the plate earned him the title of SEC Player of the Week for the second time, with the first honor coming on March 14, 2016.

Early in the season, Rooker is having a solid start, batting .394 with 17 RBIs, and has made 13 hits, eight runs scored, eight stolen bases, five doubles and three home runs. He leads the SEC in RBIs, stolen bases and total bases with 27, and is second in the conference in steals.

The third-team preseason All-American nominee is building on his performance from last season. That year, Rooker hit for a .324 average and led the team with 11 home runs and 54 RBIs, playing in 58 of the team's 63 games with 53 starts. He was named second-team All-SEC after the season.

After the University of Arizona eliminated the Bulldogs from the Super Regional, the Germantown, Tenn., native took part in the College Baseball Home Run Derby. He ended up finishing fourth in the event after hitting 27 home runs for 29 points in the first two rounds.

In his first season with the Bulldogs in 2014, Rooker redshirted before hitting .257 with 12 RBI, three doubles and two home runs in his first season of action. He only played in 34 of the team's 54 games and made 18 starts.

At Evangelical High School in Tennessee, Rooker was a standout athlete in several sports. He helped to lead the football team to the 2-A State Championship and racking up 3,300 yards of total offense and 33 touchdowns. In the 2013 season, Rooker was a Mr. Football finalist after he set 18 school records that season. He also helped his team go to the state finals in basketball.

But in baseball, he shined. In his senior year, he was a Tennessee Player of the Year finalist, a Rawlings Southeast Region Honorable Mention and FCA Memphis Chapter Athlete of the Year. He earned All-State honors from 2011 to 2013 and helped the team win state championships in 2011 and 2013.

Rooker will look to keep his hot streak at the plate going as the Bulldogs travel far west to face the University of Oregon. MSU and the Ducks will play a three-game series from Friday, March 3, to Sunday, March 5.

Game one is set to start at 8 p.m., game two's first pitch is at 4 p.m., and game three gets underway at 2 p.m. All three games will be on the Pac-12 Network. MSU also plays Louisiana Tech on Tuesday, March 7, which will air on the SEC Network Plus.