Verge in the Wild Wild West 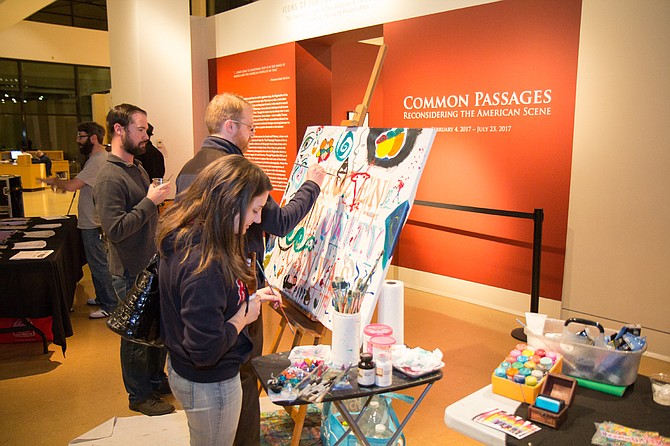 A mustache, an ear and other facial features with toothpicks stuck in their backs sit on a table at the Mississippi Museum of Art. Off to the side, a Styrofoam figure named Mr. Picasso Head waits for people to add the features in whatever way they want. In the center of the room, people dip the wheels of small remote-controlled monster trucks into paint and then race them in a kiddie pool, the wheels leaving colorful tracks on the paper that lines the bottom of the pool. In another area, people weave ribbons and other materials across a large loom.

The activities at February's Museum After Hours at the art museum gave Jacksonians and metro-area residents a taste of what Verge JXN would look like.

Verge is a new community-oriented art project that evolved from FIGMENT Jackson. The website for FIGMENT says the mission of the events, which happen in multiple cities across the United States, is to give free, family-friendly, participatory art events to communities. The first event was on Governors Island in Upper New York Bay in 2007.

The Mississippi Museum of Art’s February Museum After Hours was a preview of Verge JXN and included projects such as painting with remote-controlled monster trucks. Photo courtesy Julian Rankin

Architect Whitney Grant brought the event to Jackson in 2011. The last FIGMENT event was in 2013. In 2015, organizers held an interest meeting to see if the local arts community still wanted to have a participatory art festival.

"They were saying like, 'We can't lead it, but this is what we think it could look like, and if there are people are interested in running it, these are the things that we learned,'" says Millsaps College art professor and Verge Coordinating Producer Kristen Tordella-Williams. She, Matthew Holl, who is Verge's propaganda and marketplace producer, and Ashley Sullivan, who is the outreach producer, took up the task of organizing the festival.

"We ... decided to make it specific to Jackson and just try to serve Jackson, which I think was the biggest challenge with FIGMENT," she says.

"Basically, FIGMENT, because it was associated with these bigger cities, they didn't sell food because you had restaurants nearby, and ... you weren't supposed to be selling anything. It was all free, which is great, but in a smaller city like Jackson, we don't necessarily have the availability of a restaurant around the corner," adds Sue Carrie Drummond, who is the logistics producer and a visiting professor of art at Millsaps. And, Tordella-Williams says, with FIGMENT, they wouldn't have been able to hold the event at Lucky Town Brewing Co., and have a marketplace for artists or food trucks.

"I think it's the best of both worlds in that we get to give an opportunity to artists, and we also give the opportunity to people who are not artists to do projects, as well as for the community to see that art can be more engaging than just on a wall at a museum, and can actually see why artists have a passion for creating because visitors will be able to become a part of the art, be able to participate a little bit in that, in what it means to be an artist," she says.

Drummond says she had been a volunteer at past FIGMENT events, and in 2013, she and Samantha Ledbetter did people's hair at the event.

"We figured that we would call ourselves the Braid Babes, and anyone who would allow us to do something to their hair, we would do," Drummond says. She Drummond braided hair and made crazy hair styles with them, and Ledbetter created crowns and other items for people to wear.  Drummond says Braid Babes is a perfect example of how diverse the artistic projects at Verge can be.

"I think we need more of that, especially today," Tordella-Williams says. "More of a reason to come together despite any differences you might feel, more of a reason to see each other as more human. ... Matt and I lovingly termed (Jackson) the Wild Wild West because basically you can do whatever you want if you can make it happen."

Verge JXN is Saturday, April 15, at Lucky Town Brewing Company (1710 N. Mill St.) from 2 p.m. to 6 p.m. The event will include projects such as a community mural from Jina Daniels of Jax-Zen and the One Word Story from the Verge JXN producers. Verge will take artist applications until March 15. For more information, visit vergejxn.org or find Verge JXN on Facebook.