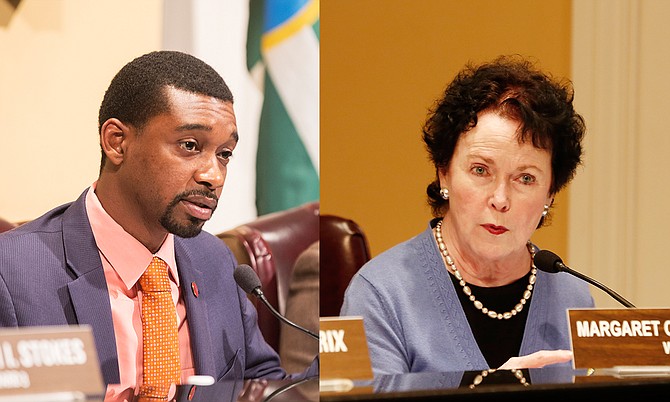 JACKSON — Laughter from the council body and attendees echoed through the room. "Oh, you have to vote on it? Oh no, I'm probably not gonna get the majority vote," Ward 7 Councilwoman Margaret Barrett-Simon said, covering her face.

Barrett-Simon along with Councilman President Tyrone Hendrix of Ward 6 received acknowledgements and gifts from colleagues and supporters in recognition of their last council meeting as elected officials on Tuesday night. She served Ward 7 for 32 years, and Hendrix served for three years.

"I really don't know if I can express how thankful I am for your friendship, for your support. We have changed a lot in three years," Hendrix told the council. "I just want to say thank you. This is an experience that I will never, ever forget."

The night was filled with emotional stories and laughter as the council recounted memories with Barrett-Simon and Hendrix. Ward 3 Councilman Kenneth Stokes presented the resolution for Hendrix and Barrett-Simon.

"The rest of the guys ran out this door. And so, I'm thinking we have three lady clerks sitting here, and I thought, I'm gonna at least try to kick him or something," Barrett-Simon said then.

The Clarion Ledger had asked Stokes why he left the councilwoman in the chamber. Stokes responded, "Well, she ain't from the 'hood. She don't know no better." The room filled with laughter.

At the end of her acknowledgement, the councilwoman began to cry as she thanked her council colleagues, family and supporters.

"It's tough out there, but it's been a blessing to have had that experience," Barrett-Simon said. The council body and audience gave the councilwoman a standing ovation.