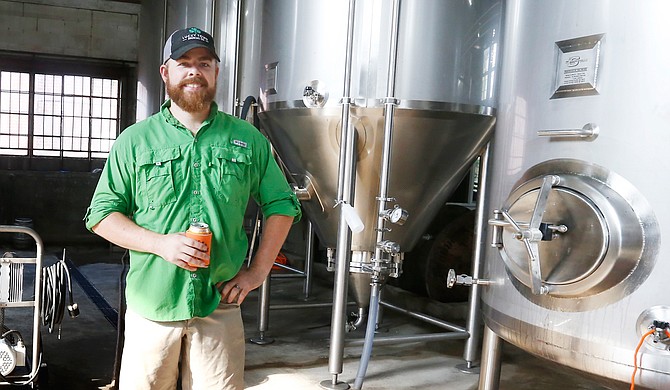 JACKSON — Lucky Town Brewing Company brewmaster Lucas Simmons' love of beer started where it does for a lot of beer lovers—in college.

"I had gotten into better beer (in) my final year of college," he says. "I stopped going out so much and buying the cheap stuff and just started buying an occasional good six-pack."

After graduating from Mississippi State University in 2003 with his bachelor's degree in engineering, Simmons went to work at the Nissan plant in Canton. During this time, he became friends with Victor Leon, a native of the Nashville, Tenn., area who spent a lot of time visiting Germany with family. With Leon having spent so much time in places with a wider range of local beer, one day, he asked Simmons, "Why is the beer selection down here so bad?"

"So we did what two young engineers do when they can't find something they want," Simmons says. "We started making it."

The two did some research during a weekend off work and ended up making an Oktoberfest-style beer in Leon's driveway. They continued brewing on the side for a while, and Simmons left Nissan in 2006 to work for Mississippi State University's Center for Advanced Vehicular Systems Extension in Canton as a field engineer, which allowed him more free time to work on their side project. Their brewing kept going, and after a while, friends were coming over to their houses for "brew days," and they would go through 10 gallons of beer in a weekend, Simmons says.

When they realized that they couldn't afford to start brewing professionally on their own, they turned to Kickstarter, where they raised about $23,000. This initial funding gave them enough to get started contract brewing and working towards getting a loan to build Lucky Town's current facility in midtown, which opened in September 2014.

Tonight, June 9, from 6 p.m. to 9 p.m., Lucky Town will be one of 27 breweries serving their products at the third annual Mississippi Craft Beer Festival in Fondren. Having participated in the festival in the last two years, Simmons says that he has had nothing but positive words for the upcoming event.

"A lot (of festivals) will ask the breweries to basically donate beer, where these guys, they buy the beer, and they promote the craft of it and don't just leach off the industry," he says. "Between that, and it's just really well run, it's always been a very positive experience from the very first time they've put it on."

This year, Lucky Town will have four brews for festival-goers to try: Ballistic Blonde, Pub Ale, Gosa Gambling, and for the first time, their summer seasonal, Old No. 49 Farmhouse Ale.

"It has lined up perfectly that we're rolling out our summer seasonal right now," Simmons says. "So us being the local brewery, I don't think there will be many people who haven't had most of our year-round products, sometimes you'll catch people who haven't had things like our Gosa, which is a sour-salt beer, because it sounds a little too weird. But here, they'll get to try it for free, and if they like it, maybe they'll pick it up later, so that's always exciting."

Mississippi Craft Beer Festival is from 6 p.m. to 9 p.m., Friday, June 9, at Duling Hall (622 Duling Ave.). Tickets are $35 per person or $10 for designated drivers. VIP tickets are also available for $65 per person, which includes bar snacks, a $15 gift certificate and early access at 5 p.m. For more information, visit fondren.org.