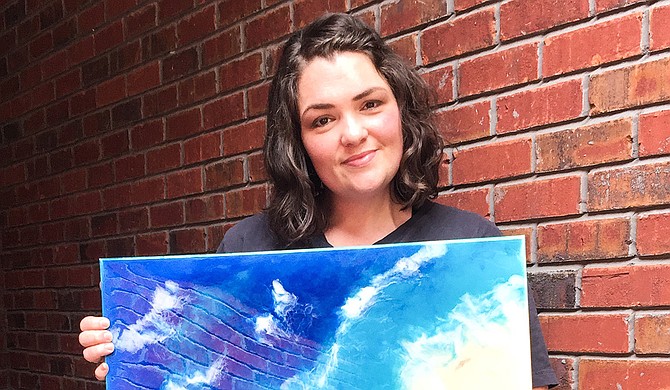 Brandi Herrington, who is a science teacher at Armstrong Middle School in Starkville, and her mom, Deborah Duncan, who is a retired high-school science teacher, say they have always been creative and artsy, so they decided to start Dunkington Art & Jewelry in April 2016.

"We both used to do actual paintings," Herrington says. "I did landscapes, and my mom did still-life paintings, which I was too impatient for. ... We filled up both of our houses with our own artwork because it was something very personal for us, and (we) didn't want to sell them."

The mother-daughter duo began making bead jewelry at first for Dunkington but found that the medium didn't allow them to be as creative, she says. Instead, they began to blend jewelry making with their love of painting.

"We do what's called acrylic pouring, and we do that in pendants, earrings, necklaces," Herrington says, "We take the leftover paint (from other art projects) and pour it in yupo paper, which is a really thin plastic, and cut it in shapes, like of Mississippi, to make jewelry. So with this, we're able to merge the jewelry aspect with painting, which is a good market when it comes to sales."

Herrington and Duncan first discovered the acrylic-pouring technique from a post they saw on Instagram. Since then, the duo has watched what they estimate to be more than a thousand videos on the method.

"So we started following a couple of people and decided we could do that, too," Herrington says. "It's the learners in us, the educators. So we took these other people's methods, incorporated our own methods and ideas, and used it to extend beyond just painting on a canvas. We also paint on wood and tiles, too."

Duncan retired from teaching in May 2015, one month after they launched Dunkington. That fall, she moved in with her daughter and son-in-law Josh to help the couple take care of their 4-year-old son, Parker, shortly after Herrington became sick and took a leave from work.

While Dunkington's work is currently just available on sites such as Facebook and Etsy, Duncan and Herrington are also participating in as many art festivals as they can. They have participated in events in places such as in Starkville, Columbus and Louisville. The Dunkington team will also be at the upcoming Mississippi Craft Show at the Clyde Muse Center in Pearl, an event that Herrington says they are excited about.

"From what we've read and heard from the vendors, there's a big respect from people that attend and the vendors of craft and craftsmanship," she says. "And being at a place where people are coming to see unique things and appreciate them and ask us questions about them is what I'm really looking forward to."

In addition, Herrington says that they are excited to get their name out there and let people know about their work, including best sellers such as painted tile coasters, and earrings and bracelets with acrylic-pour art on the inside.

"We do custom art, as well; people have already ordered (Mississippi State University) colors and MSU pendants, and we'll do Ole Miss, but we won't like it," she says with a laugh.

The sixth annual Mississippi Craft Show is on Saturday, Aug. 12, from 9 a.m. to 5 p.m., and Sunday, Aug. 13, from 11 a.m. to 4 p.m. at the Clyde Muse Center (515 Country Place Pkwy., Pearl) on the Hinds Community College campus in Rankin County. Admission is $7 for adults and free for ages 12 and under. For more information, visit mscraftshow.com.