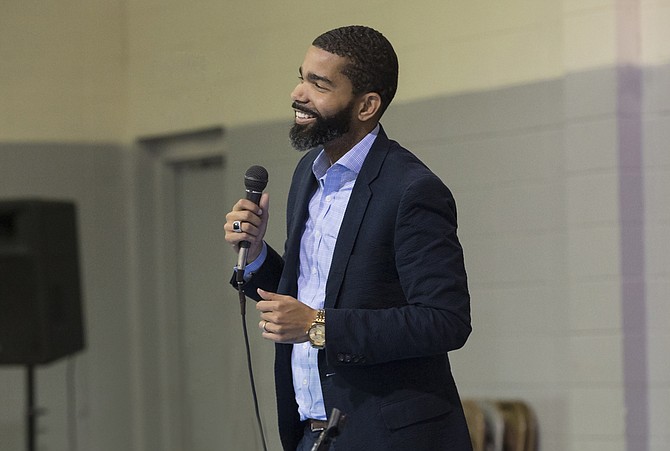 "Almost elected. Our future mayor. Can I go ahead and say that?" said York, followed by applause. Still, Lumumba encouraged listeners to still go out and vote: "I don't want anyone to neglect June 6."

The executive producer mentioned that podcasts were more evident this election season, reaching younger audiences. Lumumba admitted he does not listen to them frequently, adding that he is "really quite impressed with the podcast community in Jackson."

"Some wonderful discussion. Things that have been discussed with no other platform has really allowed for," Lumumba said.

York induced laughter with humorous transitions and questions that are typically uncommon during political interviews. He asked about the candidate's origin, implying he was "bit by a radioactive spider."

Lumumba shared stories about his childhood and first friend in Jackson, who is now his wife, Ebony Lumumba. York mentioned that he should be interviewing Ebony, who is often described to him as a "rock star."

Superheroes and comics were a theme of the discussion. York said he had challenged Lumumba's alleged geek and jock status in high school before the show, asking him whether he preferred Marvel or DC Comics, but Lumumba gave him a blank expression."

"I'll tell you what comic I am a fan of. I'm a fan of the X-Men and there's probably no more political comic than the X-Men. So, I guess it's appropriate," Lumumba said, later adding that Wolverine is his favorite character due to the comic's Civil Rights Movement similarities.

As the interview continued, it sparked laughter and slowly shifted into more personal topics. Lumumba talked about the relationship with his father: "I had the unique experience, or opportunity, to live in the house with my hero."

Growing up, Lumumba called his father "buddy," and in response his dad called him "buddy man." He added that when the two were upset with each other, his father would apologize by talking about sports.

Later in the interview, York mentioned that he and Lumumba are dyslexic, and that York's grandfather was also a lawyer and dyslexic. "The things that are the greatest challenge are the ones I want to explore," Lumumba said.

Lumumba closed, again reminding listeners to get out and vote on June 6.

Read more about the June 6 election, with polls open 7 a.m. to 7 p.m. at jacksonfreepress.com/election2017.