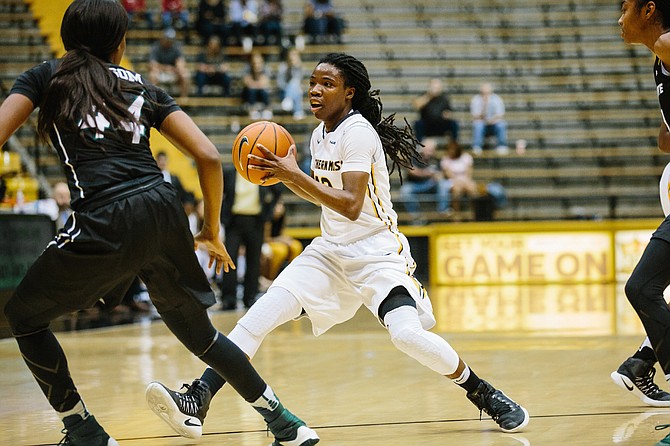 Everything has come together this year for University of Southern Mississippi senior guard Brittany Dinkins, who is having her best basketball season at USM in points, rebounds, assists and steals.

Dinkins has played in 17 games and started 16 this season for the Golden Eagles, who have an 11-6 overall record and a 3-2 record in Conference USA play. The 5-foot, 7-inch guard is currently averaging 17.8 points, 4.3 rebounds, 4.2 assists and four steals per game. Dinkins is first on the team in scoring, assists and steals, and is third in rebounds. She is also first in the conference in steals, fourth in scoring and eighth in assists.

Dinkins' play hasn't gone unnoticed. She was named C-USA Co-Women's Player of the Week for her work on the court against Old Dominion University and the University of North Carolina at Charlotte. This is the third conference award Dinkins has received after she earning Freshman of the Week honors in November 2013 and January 2014. The NCAA also named her one of the Women's Players of the Week nationally.

Against Old Dominion, Dinkins scored a career-high 32 points to go along with a record-tying 10 steals in a single game. She also added eight assists and five rebounds, filling up the statistics sheet in USM's 84-69 win.

Dinkins followed up her strong game against the Monarchs with a solid outing against Charlotte, pouring in 25 points, six steals and four rebounds, though the Golden Eagles lost 61-78 to the 49ers. The loss broke a three-conference-game winning streak for USM.

The Miami Gardens, Fla., native has led USM in scoring in 11 games this season and has scored double digits in every game for the Golden Eagles except for those against Northern Kentucky University and the University of California, Berkeley.

She was a McDonald's All-American nominee, and ranked as the 91st player in the country and 20th point guard in the nation. She also played in the Dade v. Broward and Dade v. Palm Beach All-Star Games.

Her numbers dipped in the following season. She saw action in 36 games but started just eight times, averaging 5.7 points, 2.3 rebound, 2.2 assists and 1.2 steals per game.

Dinkins rebounded in her junior season when she beat most of her freshman stats, played in 30 games and made 28 starts. She averaged 11.1 points, 2.8 rebounds, 3.4 assists and 2.5 steals per game.

Dinkins will have to keep playing at a high level and earn conference Player of the Week awards if the Golden Eagles are going to reach the postseason.