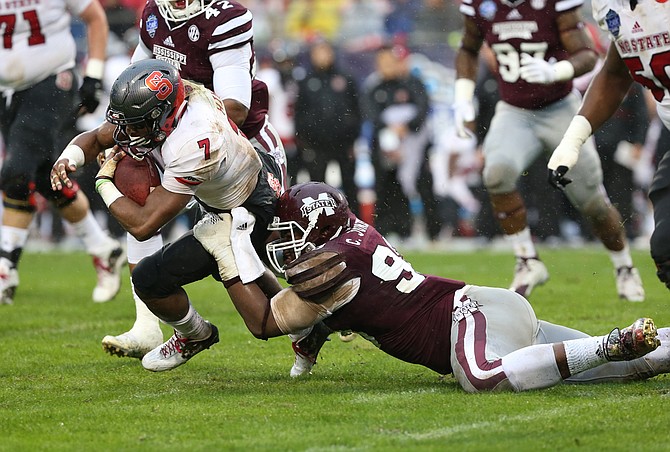 Before the 2016 NFL Draft, the majority of the focus was on former University of Mississippi stars Robert Nkemdiche, Laquon Treadwell and Laremy Tunsil, and former Mississippi State University star Dak Prescott. Prescott dominated the season headlines as he led the Dallas Cowboys to the best record in the NFC.

Over in the AFC, one of Prescott's former teammates had a solid rookie season for the Kansas City Chiefs. Defensive tackle Chris Jones left MSU after his junior season, and the Chiefs drafted him with the 37th overall pick in the second round. There is no doubt that Jones outplayed first-round pick Nkemdiche, who landed with the Arizona Cardinals.

The Houston, Miss., native appeared in all 16 games this season with 11 starts. He had 28 total tackles, 17 solo tackles, and two sacks, and defended four passes.

Nkemdiche, on the other hand, saw action in just five games and didn't make any starts. The former Rebels star made just one tackle and defended one pass.

As a senior in 2012, he helped Houston earn its first playoff win in school history, leading the Hilltoppers with 160 tackles, 14 sacks, 10 pass deflections, two fumble recoveries and an interception returned for a touchdown.

In 2013, as a true freshman at MSU, Jones played in all 13 games and made three starts. He led the team with 10 quarterback hurries, tied for the lead in tackles for a loss with seven and was second on the team with three sacks. Bleacher Report, Athlon Sports and 247Sports gave him freshman All-American honors, and he was an Associated Press Honorable Mention All-SEC.

Jones again saw action in all 13 games as a sophomore but didn't have any starts. He made 26 tackles, 3.5 tackles for a loss and three sacks.

In his final season with the Bulldogs, Jones started all 13 games and recorded 44 tackles, 7.5 tackles for a loss, four pass breakups and 2.5 sacks. He earned second-team All-American honors from Pro Football Focus.

In his three seasons at Mississippi State, Jones played in 39 games and made 16 starts, finishing his college career with 102 tackles, 18 tackles for a loss, nine pass breakups and 8.5 sacks.

So far in his professional career, the former MSU star has helped Kansas City add depth to its defensive line and has shown flashes of ability to be a star in the NFL. His play as a rookie is part of the reason why the Chiefs finished 12-4 and earned the second seed in the AFC.

Former University of Southern Mississippi star Rakeem Nunez-Roches joins Jones on the Kansas City defensive line. Jones will have his hands full in his first playoff game against the Pittsburgh Steelers.

The Chiefs will have to find a way to get pressure and sacks on Pittsburgh quarterback Ben Roethlisberger and stop running back Le'Veon Bell. The game airs at noon on Sunday, Jan. 15, on NBC.