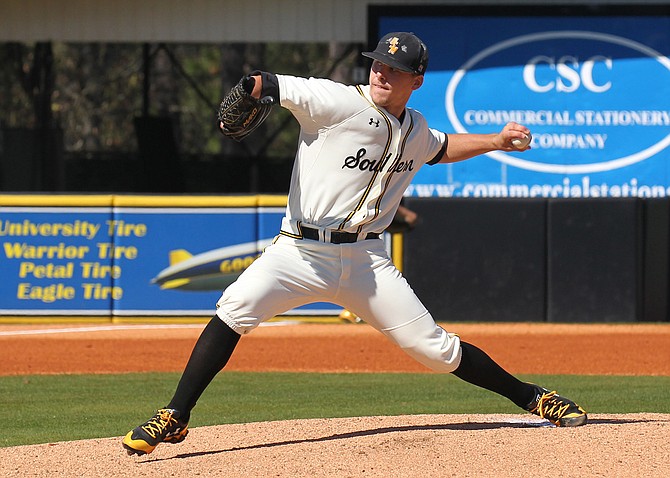 Kirk McCarty didn't have to go far to continue playing baseball after a standout career at Oak Grove High School. The former Warrior stayed in Hattiesburg to attend the University of Southern Mississippi, and as his second season begins, he's already making a mark on the Golden Eagles.

During high school, McCarty shined on the baseball diamond and the gridiron. On the football field, he led the Warriors to a state championship in his senior season in 2014, with the team earning a 14-1 record. He also threw for 80 touchdowns and 6,989 yards with 20 interceptions.

As good as he was on the football field, he was even better on the pitcher's mound. McCarty was a member of an Oak Grove program that reached the South State Championship all four years, and he helped the team earn 6A state titles in 2012 and 2014.

McCarty posted a 25-3 record as a pitcher and batted for a .364 average with 69 RBI, 16 doubles, six home runs and four triples. He played outfield and first base when he wasn't pitching.

The 5-foot, 10-inch, 185-pound left-handed pitcher earned first-team All-State from his sophomore to senior seasons and second-team All-State as a freshman, and was a Louisville Slugger honorable mention All-American in 2013 and 2014. He was All-District, All-Area and All-Region every year at Oak Grove.

In his final high-school season, McCarty finished with a 7-1 record and a 1.41 ERA, striking out 81 batters and walking just 10 hitters after pitching in 54 and two-thirds innings. He played in the 2014 North-South All-Star Game and the USA Baseball Tournament of Stars.

As a junior, McCarty set the state record for most strikeouts in a season with 118, and he finished his high-school career with a second state record when he struck out 307 batters.

As a freshman at USM in 2015, McCarty appeared in 11 games and made eight starts. He finished his first college season with a 4-1 record, 4.09 ERA, and 31 strikeouts in 50 and two-thirds innings of play. One of four former Oak Grove Warriors on the USM roster, McCarty earned 2015 All-Freshman Conference USA honors along with high-school teammate Taylor Braley.

He upped his workload in his sophomore season, pitching for 88 and two-thirds inning, and earned first-team All-C-USA honors. He made 17 appearances with 16 starts and finished with an 8-1 record, a 3.15 ERA and 89 strikeouts. McCarty led the team in starts, wins and strikeouts, becoming an integral part of the pitching staff.

The accounting major got the job done on the mound and in the classroom. He was on the President's List for the fall and spring, and earned a C-USA Academic Medal for making the Commissioner's Honor Roll. In 2015, he was named to the fall President's List with a 4.0 GPA.

Southern Miss had a successful season in 2016, ending the year with a 41-20 overall record and 20-10 conference record. USM won the C-USA Tournament, which earned the Golden Eagles the automatic bid into the NCAA Tournament, but they were knocked out of the Tallahassee Regional at the end of the season.

In the preseason, coaches picked USM to finish third in the conference for 2017. McCarty was named to the preseason All-Conference team along with infield teammates Taylor Braley and Dylan Burdeaux.

As the ace of this squad, the team will count on McCarty to anchor the pitching rotation and will need him to outduel the opposing team's best pitcher each time that he takes the mound.

The Golden Eagles kicked off the year with three wins against Northeastern University from Feb. 17 through Feb. 19. USM continues its season Wednesday, Feb. 22, at 6 p.m. with an away game against the University of Alabama, which will stream online on SEC Network Plus.