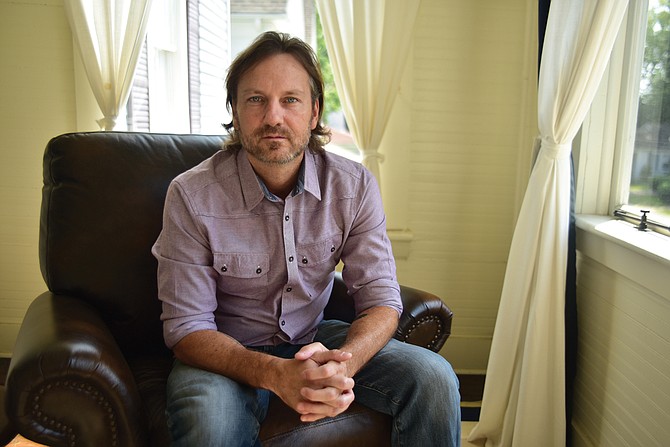 Many great books start from a small idea. Columbus, Miss., author Michael Farris Smith's latest novel began with a single image: a woman and her child walking down the side of the road on a hot day, everything that they own in tow.

"I just couldn't get that picture out of my mind," Smith says. "I think it's something you see—not necessarily a woman and child, but anytime I see someone just alone on the side of the road walking, I just wonder. I began following (the characters) to see why they were there, what they were doing and what kind of danger they'd be in."

That image became the inspiration for his new thriller, "Desperation Road" (Lee Boudreaux Books, 2017, $26). Set in Mississippi, the novel follows ex-convict Russell Gaines, a woman named Maben and her daughter, Annalee, all of whose lives become intertwined after a chance encounter—though it's tough to say much about the plot without spoiling the many twists that Smith subjects his characters to.

The book has received plenty of praise for its winding tension, even before its Feb. 7 release, with a Gold Dagger Award nomination from the Crime Writers' Association, and inclusion on Barnes & Nobles' Discover Great New Writers list for the spring, the Indie Next List for February and Amazon's "Best Books of the Month."

"I'm helped in the process by the fact that I get bored easily," Smith says with a laugh. "If I feel like I'm getting bored, I make something happen. I'm also of the opinion that I don't want my characters to have one problem. I want them to have several things they're dealing with because that's how it is in life. I mean, none of us have just one thing that's bothering us."

While he says that he agrees with people who refer to the novel as dark or noir, he also sees "Desperation Road" as a story of courage, redemption and love for humanity. Even for those who wouldn't normally read a thriller or crime novel, Smith says the book is a worthwhile read for those interested in his home state.

"You know, it's a Mississippi novel," Smith says. "I've had a couple people say to me already, 'If I wanted someone to know what Mississippi was like, this is the book I would tell them to read.' So I guess it doesn't matter what genre you're into. If you're looking for a Mississippi novel, crack it open."

"Desperation Road" is the follow-up to Smith's first novel, "Rivers" (Simon & Schuster, 2013, $25), which also received an Indie Next List selection, appeared on several national lists of 2013's best books, and earned Smith the 2014 Mississippi Author Award for Fiction. The novel was also covered and reviewed in major publications such as The New York Times, The Paris Review and The Washington Post.

With that type of attention on his work, one might expect Smith to be somewhat nervous at the anticipation for "Desperation Road," but he says that he felt more comfortable with the writing process now after his experience on "Rivers" and his debut novella, "Hands of Strangers" (Main Street Rag Publishing Company, 2011, $9.95).

It's just about going into his workspace each day and writing the best story that he can—and living up to a high standard that you've already set for yourself is a pretty great problem to have, he says.