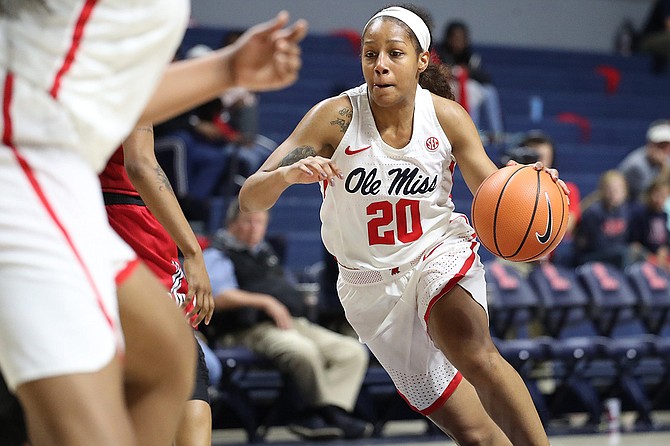 The Rebels have a perfect 7-0 record at home after defeating the Golden Eagles. UM controlled the whole game from the start, racing out to an 15-8 lead in the first quarter and never looking back.

Junior guard Madinah Muhammad, who leads the team in scoring with 20.1 points per game, has helped spur the Rebels' hot start this season. She and fellow junior guard Alissa Alston both finished the game against USM with a team-high 19 points.

Muhammad has scored double-digits in every game this season except one when the Chicago native went scoreless against Temple University on Nov. 25. She suffered an ankle injury in practice the week of the game and only played eight minutes before being unable to continue. Only four days later, she bounced back and scored 16 points against Middle Tennessee State University.

In five games this season, Muhammad has scored 20 or more points, including a season-high 30-point performance in the Rebels' 74-48 win over Arkansas State University on Dec. 2. She also scored 29 points in her team's lone loss of the season against Saint Louis University on Nov. 17.

Muhammad has gone for 27 points twice this season, first against Northwestern State in the opening game, and then again three games later against Delaware State University. She also managed 24 points against Troy University in the following week.

Currently, Muhammad is second in the Southeastern Conference in scoring behind University of South Carolina star A'ja Wilson, who is averaging 24 points per game. Muhammad is currently tied with the MSU Bulldogs' Victoria Vivians at 20.1 points per game.

The guard is third in free throws attempted in the SEC with 60 and is making 86.7 percent of her foul shots. She is third in three-pointers at 27 with 40.3 percent accuracy from downtown, and she is tied for seventh in the conference in steals with 1.9 per game. The star guard is also tied for 11th in assists with 34 on the season—good enough for a 3.4 average per game. Muhammad is 23rd in the conference in field-goal percentage, shooting 40.4 percent.

Her 20.1 points per game is seven points higher than she averaged last season. As a sophomore, Muhammad led the Rebels in scoring with 13 points per game. She also had 2.8 rebounds per game, having played in 28 games and started 27 games.

She joined the Rebels in 2015 after a successful high school career in Chicago and only averaged 7.5 points per game with 1.4 rebounds per game. She appeared in 30 games that season and made 21 starts.

Muhammad and the Rebels will have a chance to show just how close they are to catching the No. 3-ranked Bulldogs this Sunday, Dec. 17, on the road against the University of Oregon. The MSU women won 90-79 against the Ducks, who are currently ranked ninth in the nation, on Wednesday.

CORRECTION: In a previous version of the story, we incorrectly said that the University of Oregon beat Mississippi State University. The story has been changed to reflect the correct. The JFP apologizes for this error.