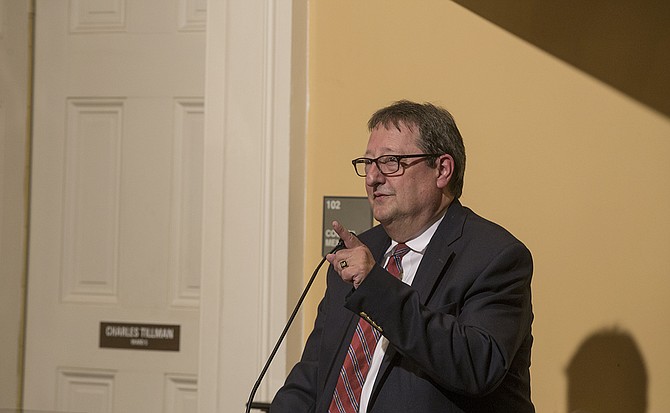 Hill Baughman is the operations and utility manager of Burns and McDonnell, an environmental and consulting solutions firm helping the City of Jackson with water and sewer problems. Photo by Imani Khayyam.

JACKSON — Jacksonians and businesses are contributing to the city's water and sewage problems by pouring fats, oil and greases down drainage pipes, consultants from Burns and McDonnell told the Jackson City Council during a work session Monday. The City contracts the environmental consulting to help it navigate a federal consent decree demanding that Jackson clean up water and sewer problems.

"One of the issues that we're having around town is pipes that are clogging up with grease just because we're not getting enough regular maintenance on these lines," Hill Baughman, the operations and utility manager of the firm, told the council in its quarterly update. He referred to the fat, oils and grease problem as "FOG," which is a primary cause of sewage overflows and Jackson's biggest challenge right now with meeting the consent decree.

This eventually led to the consent decree between the U.S. EPA and the City of Jackson, which was finalized in March 2013 in order to meet Clean Water Act standards and reduce pollution in the water. A consent decree is a contractual agreement between two parties to correct or cease certain conduct.

Under the consent decree, the City must repair the West Bank Interceptor, the primary wastewater collector for Jackson. The City must also fix leaking sewer-collection system pipes, stabilize wastewater-treatment plant facilities, and improve its collection, pumping and treatment capacity. The deadline for all improvements is 2030, 17 and a half years from now.

Ward 4 Councilman DeKeither Stamps asked at the meeting how the consent-decree requirements will affect the City's public-works capacity and hiring. "Because the system is crumbling because of lack of basic maintenance from internal capacity of the public-works department," Stamps said.

Burns and McDonnell's program management director, John Pruss, responded that the department needs additional maintenance workers for the sewage system. But, he warned, they need to earn enough pay to stay in the jobs. Many workers complete the proper training and leave to work for private industries, he said.

Replacing decaying infrastructure is a primary concern as well. "The sewer pipes and the manholes deteriorate over time. Over time, the pipes will crack and collapse, and obstructions occur," Pruss said.

Pruss and Baughman explained how Jackson experienced a number of sewage overflows that occurred during both wet and dry weather. Pruss stressed that overflows should not occur during dry weather seasons. He displayed a graph showing the reported sewer overflows from 2014 to 2017.

"In that 40-month period, 25 months had more dry weather overflows when there really should be little to none," Pruss said.

The consultants added that the capital investment would cost the City between $615 million and $800 million annually in order to meet these requirements. Along with that, operation and maintenance would range between $2.5 million and $3.5 million.