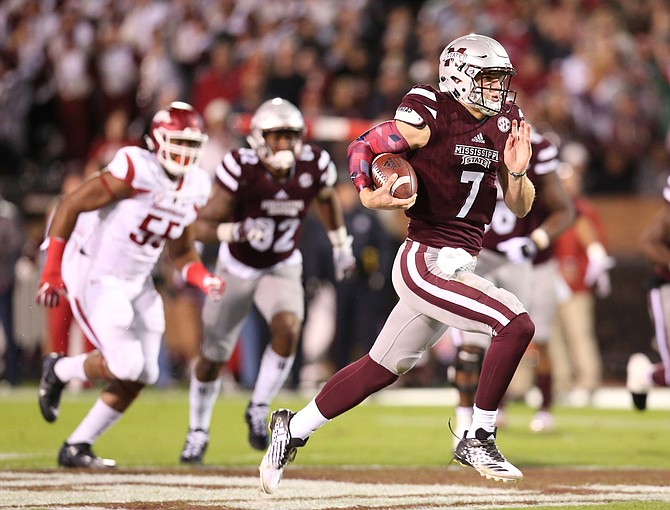 MSU quarterback Nick Fitzgerald is one of the hopefuls for this year’s Conerly Trophy.

JACKSON — Last season, University of Mississippi tight end Evan Engram took home the 2016 Conerly Trophy as best college football player in our state. Engram has moved on to the NFL, and that means this year’s race should be as wide open as ever.

Each year, I try to put together a list of preseason players to watch as favorites for the Conerly. Some years, a player on the list wins the award, and sometimes it is someone completely different.

This year, I have three quarterbacks, two defensive linemen and one running back as my preseason picks. That doesn’t mean any of these players will win, and I don’t have a vote for the award at the end of the season.

Patterson got a limited look last season after starter Chad Kelly went down due to injury. The highly recruited quarterback showed flashes of superstar potential during his three-game showing.

Patterson threw for 880 yards on 72 completions with six touchdowns and three interceptions. He ran for 169 yards on 41 attempts. This year, the youngster should put up video game-like numbers if the Rebels’ season doesn’t fall apart.

defended, three forced fumbles, one fumble recovery and one interception.

The standout defensive end stuffs running backs and stat sheets. It would not be a surprise to see him win the award with another outstanding season.

No player in the state had a tougher job last season than Fitzgerald. He had to take over at quarterback after, Dak Prescott, arguably the best player in school history, left for the NFL.

Fitzgerald had early struggles, but as the season went along, he found his groove for the Bulldogs. He threw for 2,423 yards on 196 completions with 21 touchdowns and 10 interceptions.

The MSU quarterback was just as dangerous on the ground rushing for 1,375 yards on 195 carries. If Fitzgerald can become a better passer, he could lead the Bulldogs to Prescott levels of success and a Conerly Trophy for himself.

Injuries derailed Footman’s 2016 season since he only played in seven games. He still posted strong numbers with 1,134 yards on 84 completions with six touchdowns and interceptions.

He wasn’t as dangerous a runner with just 378 yards on 68 carries with seven touchdowns. In 2015, the quarterback posted 1,000 yards rushing and passing, with 25 total touchdowns passing and rushing.

A healthy Footman could deliver Alcorn State its first Conerly winner. If he can stay healthy, he will have the team around him to put up huge numbers.

Anderson can play defensive end or defensive tackle for Jackson State. He is a versatile piece of the defensive line, and the offense has to account for him on every play.

Last season, he led the nation at the FCS level in tackles for a loss with 25.5 to go along with his 55 total tackles, 31 solo tackles and nine sacks. It might take massive numbers for a defensive player from the SWAC to win the Conerly since no player from the conference has taken home the award.

No disrespect to Evan Engram, but Ito Smith should have won last year’s Conerly Trophy. Engram might have had more NFL potential than Smith but no player meant more to their team than Ito.

Smith rushed for more than 100 yards eight times last season. He scored in every game but one: Southern Miss v. Louisiana Tech. When quarterback Nick Mullens got injured, Smith carried most of the offensive load.

Smith has already rushed for more than 3,000 yards during his career. He might have to rush for 2,000 yards this season to take home the Conerly.

There you have it. Those are my preseason favorites for the 2017 Conerly Trophy. Did I miss a player that should be on the list? Is there a player you think will win? Let me know just how wrong I am on Twitter at @JFPSports.