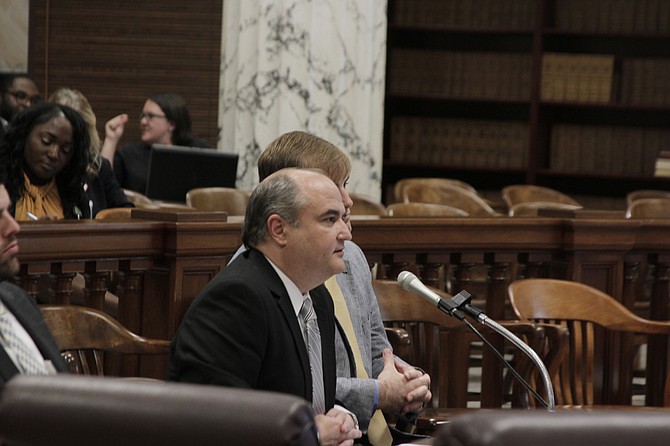 Lots of procedures and rules that MDHS operates under are malleable—up to the discretion of the executive director John Davis (pictured) and ultimately Gov. Phil Bryant, who appoints the agency's leader. Photo by Arielle Dreher.

The barriers to entry for receiving child-care support from the government don't seem like barriers for upper- and middle-class men and women: an email address, a stable home address, long-form birth certificates. But for low-income families, Internet access and a stable living environment—let alone an address—to keep things like birth certificates safe aren't a given; they're a privilege that many families in poverty cannot afford.

Abraham Maslow's hierarchy of needs has been cliched to death, but the base of his pyramid reflects the deeper human instinct for survival. We need food and water, warmth and rest, and we need security and safety. Those staples make up the base of survival for humans, Maslow believed, and American politicians have made policy according to these needs.

The Temporary Assistance for Needy Families and Supplemental Nutrition Assistance Program, or TANF and SNAP for short, are both programs that address the base level of human need—hunger. Building on that need, the federal government authorized the Child Care Payment Program to help working parents pay for child care, especially for young children not in school yet. Few jobs allow a parent to bring their child to work, so child care for low-income working parents makes sense.

But so often, the implementation of programs intended to help those in the most need can actually do harm if they are not executed in an intelligent, practical way with the people who will benefit from the program in mind. The barriers to entry in Mississippi's Child Care Payment Program are an example of this. Several middle- and upper-class Mississippians likely have a different address listed on their license or car tag than their home address, depending on which tag would cost less. But parents trying to get child-care support are not afforded this privileged loophole.

When we make policy for a certain group of people, in this case low-income families in need of child-care support, we should be listening to not just the child-care providers but the parents themselves who want to use the program.

The Mississippi Low-Income Child Care Initiative is hosting town-hall meetings across the state about the new CCPP policies. Parents and providers are speaking out about suggestions and potential fixes to keep parents who really need the support enrolled in the program. The Mississippi Department of Human Services needs to listen. Lots of procedures and rules that MDHS operates under are malleable—up to the discretion of the executive director John Davis and ultimately Gov. Phil Bryant, who appoints the agency's leader.

Of course, Davis heads the same agency head who appealed U.S. District Judge Carlton Reeves' ruling to strike down the House Bill 1523. Caring for the marginalized in society, whether that be the LGBT community or those families on the poverty line, should be not only a goal but a priority of MDHS. We challenge them to act like it.