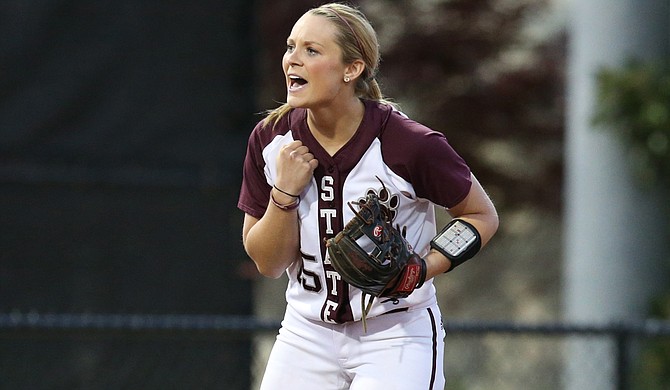 The University of Georgia only scored 13 runs combined in its three-game softball series against Mississippi State University last weekend. Meanwhile, MSU senior Caroline Seitz drove in 14 runs by herself against Georgia.

During the battle of the SEC's Bulldogs, Seitz staked her claim as the top dog. The Birmingham, Ala., native finished the weekend seven for 10 at the plate. She hit four homeruns with two grand slams, scored four additional runs, and had a 1.900 slugging percentage and a .667 on-base percentage.

Seitz turned into a one-woman wrecking crew against Georgia. She is the first player in MSU softball history to hit four homeruns in an SEC series. That weekend, she also became the first Mississippi State player to hit two homeruns in a game since Mackenzie Toler on May 2, 2015, at the University of South Carolina.

In game one on Friday, April 14, Seitz went two for three at the plate with six runs batted in, a grand slam and one run scored, and MSU won 9-4. The next day, she followed that up with three for four at the plate and drove in five runs, hit a second grand slam and scored an additional run during Georgia's, who won 7-6 in its lone victory in the series. Seitz didn't slow down in the series finale on Sunday, as she went two for three with two homeruns, three RBIs and two runs scored in a 5-2 series-clinching victory for MSU.

Seitz extended her streak of hitting safely to seven consecutive games. The infielder brought that number to eight games during MSU's 6-0 win against Alcorn State University on Tuesday, April 18.

She entered this season as one of the staples of the MSU program and is ranked in the top 10 in several offensive categories. She currently is batting .304 with 20 runs, 41 hits, six doubles, and a team-leading six homeruns and 34 RBIs.

Even more of an accomplishment, this is the first time that MSU has won a series against Georgia since 2008 and the first time Mississippi State has defeated Georgia in Athens since 2007.

Seitz and the Bulldogs will look to win a third-straight SEC series against the University of Arkansas, Saturday, April 22, through Monday, April 24, on the SEC Network.