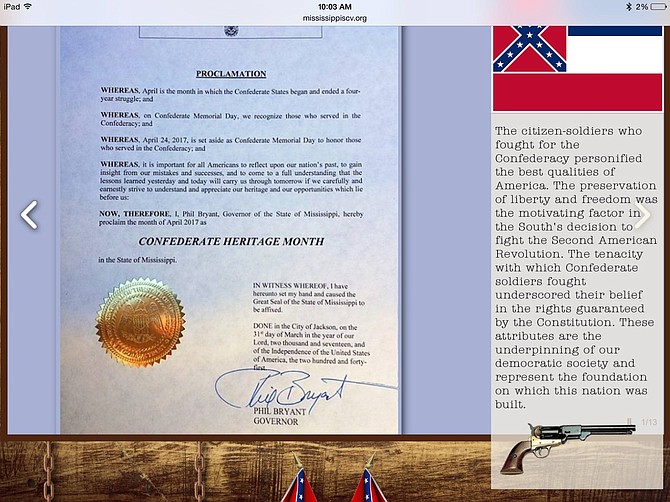 JACKSON — In February 2016, the Jackson Free Press broke the news that Gov. Phil Bryant had quietly declared last April Confederate Heritage Month. Even though the proclamation was not then listed on the governor's website (but was added after our story), it was on the Sons of Confederate Veterans website. The little-publicized news that this long-held tradition continued in Mississippi went viral quickly, causing both outrage and a show of support for the State of Mississippi's continued celebration of the Confederacy.

This year, Bryant waited until the last hour to sign the 2017 proclamation, which is not yet linked on the governor's Proclamations page as of Sunday, April 2, two days into the celebratory month. The proclamation, dated March 31, 2017, is displayed on the front page of the Sons of Confederate Veterans website, however, as usual.

The Sons of Confederate Veterans site has a message next to the proclamation on the site: "The citizen-soldiers who fought for the Confederacy personified the best qualities of America. The preservation of liberty and freedom was the motivating factor in the South's decision to fight the Second American Revolution. The tenacity with which Confederate soldiers fought underscored their belief in the rights guaranteed by the Constitution. These attributes are the underpinning of our democratic society and represent the foundation on which this nation was built."

The Mississippi Declaration of Secession reads a bit differently, however, directly attributing the cause of Mississippi's secession and entry into the Confederacy to the need to protect the institution of slavery: "Our position is thoroughly identified with the institution of slavery—the greatest material interest of the world. Its labor supplies the product which constitutes by far the largest and most important portions of commerce of the earth. These products are peculiar to the climate verging on the tropical regions, and by an imperious law of nature, none but the black race can bear exposure to the tropical sun. These products have become necessities of the world, and a blow at slavery is a blow at commerce and civilization. That blow has been long aimed at the institution, and was at the point of reaching its consummation. There was no choice left us but submission to the mandates of abolition, or a dissolution of the Union, whose principles had been subverted to work out our ruin."

In Georgia, which had stopped celebrating "Confederate" month out of respect for the black church members killed in Charleston, S.C., a lawmaker is arguing to bring it back because President Donald Trump is helping end an era of "political correctness."

Read more about Confederate Heritage Month, the Mississippi state flag and the reasons Mississippi seceded and fought the Civil War at jfp.ms/slavery.