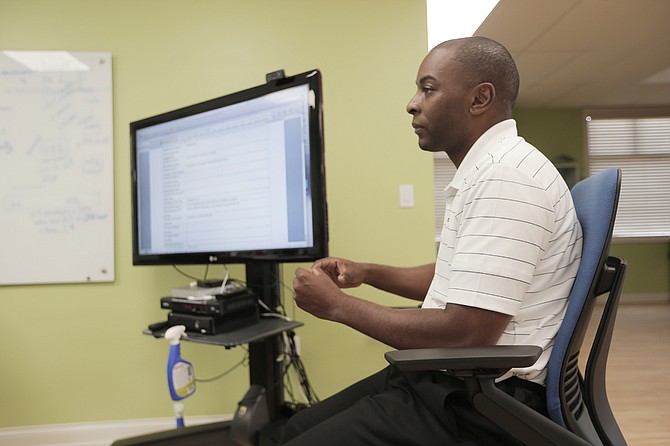 Tamu Green, leader of scientific research at SR1, says you cannot put a price on the value of after-school education. Photo by Imani Khayyam.

JACKSON — The inside of SR1 (Scientific Research) a nonprofit afterschool program serving local K-12 students, looks like a scene from the future. The walls are Orbit City sky blue and Spotify green. Technology for every purpose occupies each corner, from barndoor light panels for future photographers to compound microscopes for burgeoning scientists.

A 5-foot-tall functioning robot leads a phalanx of smaller, award-winning robots—all built by students—stacked high on wire shelves behind it.

At the meeting table on a Tuesday afternoon, staff discuss the ideal future for SR1. The topic is menu expansion of its already-long buffet of opportunities for students it serves.

In addition to project-based learning, SR1 kids travel statewide and compete in robotics tournaments and visit college campuses. They perform well on state-testing assessments across all subject areas, not just math. Even their parents get help from SR1on how to advocate for them as students.

SR1's intersectional, interdisciplinary focus on giving long-term evidence-based services to those they help—emphasizing the role of girls and people of color in STEM fields, and personal development, among other things—has seen 100 percent of its students graduate high school and attend college to study in a variety of fields.

But state-level blunders are tempering SR1 Tech's future, like dozens of other after-school programs in Mississippi, by mishandling federal 21st Century Community Learning Center funds. The money is supposed to flow from federal Title IV funds, which help supplement the cost of after-school programs serving students mostly of color in low-income, under-performing schools. And for many, that pipeline is gone.

The Mississippi Department of Education fired three employees in August for over-committing 21st Century CLC money to new programs this year without taking into account programs approved for the prior school year. This year, when they realized the accounting problem they had created, they used Title I money to make up the difference creating a $19-million deficit.

Programs that qualify for the five-year CCLC grants receive up to 100 percent of the funds for which they apply. MDE decreases the amount of funds by 20 percent throughout the third through fifth years of the grant's lifespan.

In a Sept. 16 press release, MDE announced it would give only $5.6 million of $14.6 million awarded this year to programs in their fourth or fifth years of receiving the grant. MDE will not award money this year to programs that received the funds for the first time in 2014-15 and 2015-16, saying that they were awarded "in error."

Tamu Green, lead scientific researcher at SR1, says his organization has always prioritized frugality, but that the $250,000 loss, which among other services helped provide transportation to participants, was a "huge blow" for SR1.

"The biggest thing that really hurts is that everyone is looking for answers in education," he said.

"We don't have them all, but our model is proven. Now we have to make cuts, but it's not like we're cutting out anything that's not working."

Statewide, other organizations were similarly unlucky, like the Boys and Girls Club of the Mississippi Delta. CEO David Dallas told the Jackson Free Press that the Delta Boys and Girls Club has eight clubs serving more than 2,000 students between Tunica and Yazoo counties.

"We'll probably lose about $200,000 over the next 12 months," Dallas said. The total budget for eight clubs from Tunica County to Yazoo County is about a million dollars. "We are a pretty lean organization. ... A hit like this really hurts us."

A 2007 study from The Collaborative for Academic, Social and Emotional Learning showed that after-school programs using evidence-based approaches to caring for children saw better outcomes for them. Kids' academic, personal and social skills increased, and they felt better about themselves in general.

Additionally, the Promising Afterschool Programs Study, concluded in 2007, found that disadvantaged students who regularly participate in high-quality after-school programs usually see significant gains in test scores and work habits, as well as a corresponding decrease in behavioral issues in school.

Afterschool programs do more than just help increase academic success: They may prevent juvenile crime. ] The Afterschool Alliance, a nationwide group dedicated to increasing affordable after-school options for K-12 students, reports that most juvenile crime occurs between 3 p.m. and  6 p.m.—when 25 percent of children, and 17 percent of Mississippi's children, are generally unsupervised while their parents are at work.

Dallas says he as CEO wants to focus even more efforts on gaining local and community investments rather than rely on the state and the federal governments.

"These kids are in their communities. We want them to invest."

"It's a pretty small investment," Dallas added. "It costs about $800 a kid. Not very expensive when you consider how kids could wind up in gangs and juvenile systems instead."

Sierra Mannie is the education reporting fellow for the Jackson Free Press and The Hechinger Report. Email her at [email protected].