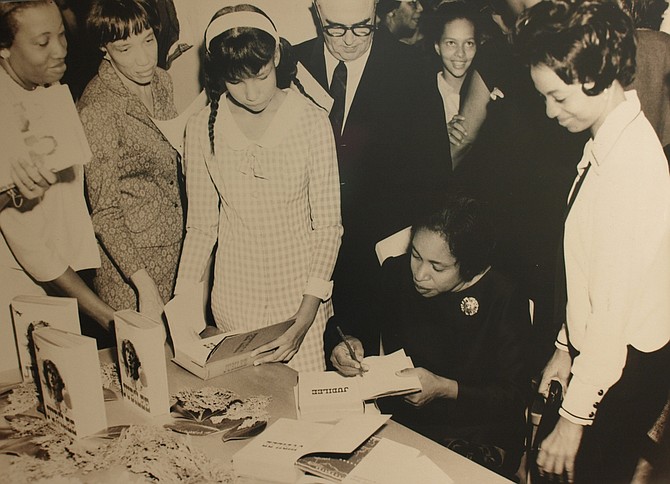 In Margaret Walker's critically acclaimed novel "Jubilee," the main character, Vyry Brown, tells her son Jim, "Keeping hatred inside makes you git mean and evil inside. We supposen to love everybody like God loves us. And when you forgives you feels sorry for the one what hurt you, you returns love for hate, and good for evil. And that stretches your heart and makes you bigger inside with a bigger heart so's you can love everybody when your heart is big enough. Your chest gets broad like this, and you can lick the world with a loving heart! Now when you hates you shrinks up inside and gets littler and you squeezes your heart tight and you stays so mad with peoples you feels sick all the time like you needs the doctor. Folks with a loving heart don't never need no doctor."

The novel, which is the first neo-slave narrative ever published, focuses on the story of Brown, a slave during the time of the Civil War, and her experiences from childhood to adulthood.

Walker was born July 7, 1915, in Birmingham, Ala., to educator and Methodist minister Rev. Sigismund C. Walker and music teacher Marion Dozier Walker. Her family moved to New Orleans in 1925.

After high school, she attended New Orleans University, which is now Dillard University, for two years. After poet Langston Hughes urged her to seek training in the North, she transferred to Northwestern University in Chicago. In 1935, she received a bachelor's degree in English from the school.

Two years later, she published "For My People" in Poetry magazine, which became one of her most famous poems. She received her master's and doctorate degrees in creative writing from the University of Iowa in 1940 and 1965, respectively. In 1942 she published her first volume of poems, "For My People."

Three years after receiving her master's degree, she married Firnist James Alexander, and in 1949, the family moved to Jackson.

"... Margaret came to Jackson in 1949 as an extremely well-educated black female intellectual and writer, artist, teacher. It was incredibly dangerous during that period of the early years of the Civil Rights Movement to be any of those things ... and she was all of them at once," Robert Luckett, director of the Margaret Walker Center at Jackson State University, says.

The year she moved to the city, she began teaching at JSU, then Jackson College. In 1968, she founded the Institute for the Study of History, Life and Culture of Black People, now known as the Margaret Walker Center.

"Jubilee" was first published in 1966 while Walker was living in Jackson on the same street Medgar Evers had lived on, so Luckett says the book itself was an act of bravery.

"It (was) the first novel to be written and published from the perspective of a black female slave going from slavery to freedom, and it's the true story of Margaret's grandmother and great grandmother and great-great grandmother. ... The opening scene of 'Jubilee' is Margaret's real great-great grandmother dying in childbirth after having been repeatedly raped and given birth to multiple children by her master. She publishes that in 1966 while living here on the street that Medgar was assassinated on. It's an incredibly brave, powerful thing to do and was the first of its kind," Luckett says.

On Sept. 6 of this year, Publisher Houghton Mifflin Harcourt released a 50th anniversary edition of the book, which includes a foreword from poet, writer, activist and educator Nikki Giovanni. The book was also released for the first time on ebook and audiobook.

The reception is from 4 to 6 p.m. at the Margaret Walker Center in Ayer Hall. University of Mississippi English and creative writing professor Kiese Laymon will give an address.