How to Make Sugar Skulls 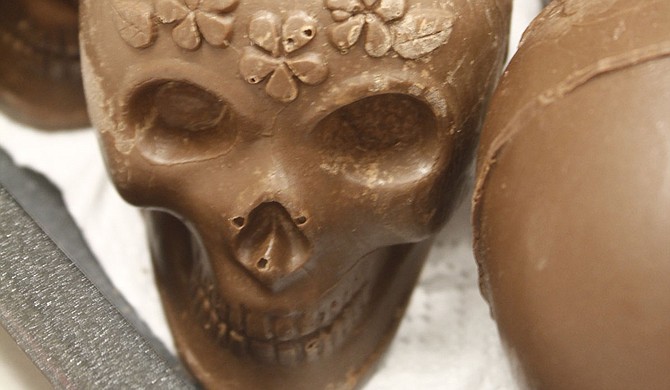 In Diá de los Muertos celebrations, sugar skulls represent those who have passed away. Photo by Amber Helsel.

While Americans are celebrating Halloween by trick-or-treating or attending parties, many Mexican families begin building an altar, which is called an ofrenda (offering), to honor the dead for Dia de los Muertos on Nov. 1 and 2. The altars, which generally have at least two tiers, have offerings such as candles, saints and the crucifix, marigolds, salt, water, photos and mementos of the dead, pan de muerto (sometimes called bread of the dead), and other food and drinks that the deceased enjoyed, and sugar skulls.

The tradition of sugar art began in the 17th century when Italian missionaries brought sugar art to the New World.

Sugar skulls, which can be made using ingredients such as clay, sugar or even chocolate, represent someone who has died. They often have departed soul's names on them and are placed on the ofrendas to honor the spirit.

They are decorated with different colors of royal icing, sequins, colored tin foil and other sparkly decorations.

So how do you make them? Carla Hobson of local business Calaverita, or Little Sugar Skull, recently did a sugar-skull workshop to explain the history and process behind the folk art.

For more information on Little Sugar Skull and future sugar-skull workshops, find the business on Facebook.

Mix together sugar and water. The mixture is ready when it's the consistency of wet sand. Put the mixture firmly into the molds and use something with a straight edge to make sure the back of the mold is flat. Pack the mixture down more. Place a square piece of cardboard on the back, turn it over and remove the skull carefully.

If you're using a two-piece mold, once the skull feels sturdy enough to handle, hollow the back out.

Let the skull dry anywhere from eight to 12 hours.

To make the icing, beat one egg white until it forms peaks. Then, little by little, add the sugar. The icing is done when it forms peaks. If it looks hard, you can add a little water, and if it is liquidy, add more powdered sugar.

Divide the icing into disposable bags or cups and mix the colors in, starting with one drop. Leave about 1/2 cup of icing white.

If you're using a two-piece skull, once it's completely dry, use the white icing to glue the two pieces together.

For the eyes, you can put a small dot of white icing in each eyehole and then place sequins, gems or rhinestones over the dot. Create designs with the icing. You can also use decorations such as ribbons, beads and more.