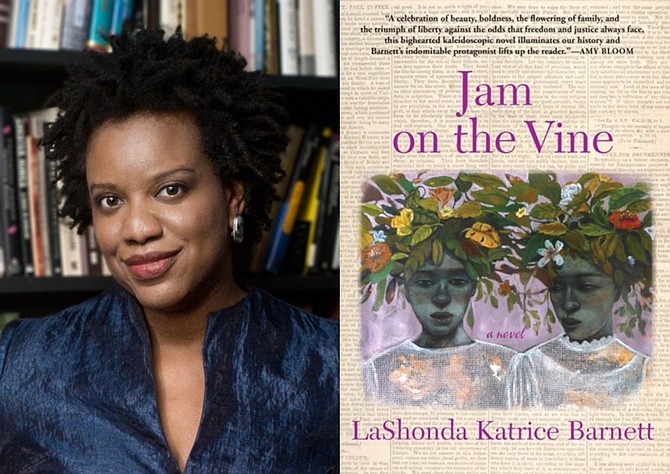 For her first historical-fiction novel, African American playwright, professor and author LaShonda Katrice Barnett decided to take a different path than many of her predecessors and tell a new story in the era of Jim Crow.

Her book, "Jam on the Vine," centers on the journey of protagonist Ivoe Williams, the daughter of a Muslim cook and a blacksmith. Williams, born in the Brazos River Valley in Texas, develops a love of literature from newspapers that she steals from her mother's white employer. This eventually leads her to become a journalist and start her own newspaper, Jam on the Vine.

Barnett says the book isn't a tragedy—in fact, it's a love story and a celebration of African American femininity.

"I wanted to write a story set during this period in American history where the protagonist is not despondent, depressed, unloved, victimized," she says. "I'm very, very tired of this trope, this symbol of black women always being the victim. You don't get that in my character Ivoe. ... She's not a victim. (It) was very important to me to write about a functional black family, to write about a black woman who has passions, career passions, and who experiences love and is able to pursue her career and has adventures."

She says books and movies about that era tend to portray a monolithic idea of what African American life was like in Jim Crow, so she wanted "Jam on the Vine" to represent a part of black American life that isn't often seen in entertainment or the media.

Barnett grew up in the Midwest. She received her bachelor's degrees in linguistics with a focus on German and Russian and literature from the University of Missouri in 1995, master's degree in women's history from Sarah Lawrence College in New York in 1998 and a PhD in American studies from the College of William & Mary in Virginia. She will be a keynote speaker at the Mississippi Humanities Council's "Celebrating the Legacy of the Black Press" symposium on Oct. 18 at Jackson State University (1400 John R. Lynch St.).

"Black newspapers are one of the most important institutions to emerge from black America," Barnett says. "Certainly, one of the major ways that we were able to survive after slavery ended in 1865 was because of black press, because of the efforts of early black journalists and black editors."

She says what she hopes people take away from her keynote speech is an understanding that, even now in 2016, many African Americans feel they are a nation within a nation.

"You see this with the horrible picking off of black men by cops," she says. "This shouldn't stand; we shouldn't be allowing this to stand. ... It's a problem. And there are many other ways in which the infrastructures in African American communities (are breaking down)—health issues, educational issues, housing issues. There's a desperate cry for help surrounding these infrastructures in black communities, so it's very clear that we are still battling in a nation with this sort of seamless integration of all American people. We're still battling with that. There's still a need for the black press to address, to speak to the issues that black people are facing, to speak to these issues head on, to grapple with them. There's still a need."

She says while she wants to celebrate African American ancestors, she also wants to bring attention to marginalized communities, such as the immigrant communities.

"The press has always been the great bulwark for democracy," she says. "Journalists are heroes. The newspaper is the way that we all sort of get on the same page, those stories that get published. Of course, when you ignore marginalized groups, when you don't publish those stories, then people don't know ... what communities are up against."

"Celebrating the Legacy of the Black Press" is Tuesday, Oct. 18, from 2 to 8 p.m. Barnett will present the keynote address for the first panel presentation, which takes place from 2 to 4 p.m. in the Student Center Theatre at the Jackson State University (1400 J.R. Lynch St.). It will cover the historical role of African American newspapers as sources of information not easily accessible in mainstream media and as a voice for the African American perspective on politics and social issues. The speakers include Elyane H. Anthony, the dean of JSU's School of Journalism and Media Studies, and Will Norton, the dean of the University of Mississippi's Meek School of Journalism and New Media.

The second panel is from 6 to 8 p.m. in the Percy W. Watson Lobby at JSU's downtown campus (101 W. Capitol St.). The keynote speaker will be Black Voices founder Barry Cooper, and the panel will address the contemporary challenges and trends in the African American media. Some of the panelists include Mississippi Link Publisher Jackson Hampton, Mississippi Public Broadcasting Executive Director Ronnie Agnew and the Jackson Free Press Editor-in-Chief Donna Ladd.

A public reception for the event will take place from 5 to 6 p.m. before the second panel at the JSU downtown campus' art gallery. For more information, visit mshumanities.com.