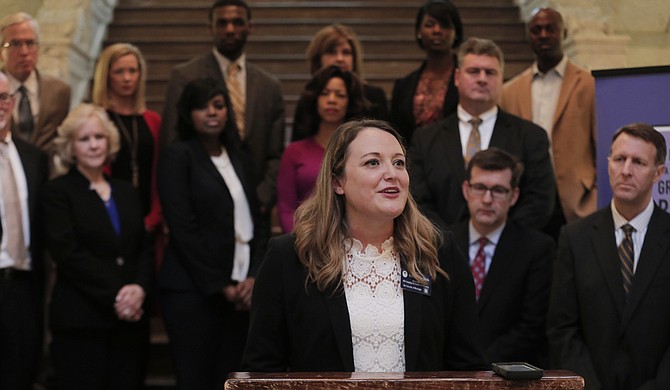 Ashley Sheils, coordinator of the Mississippi Campaign for Grade-Level Reading, says the campaign will expand its efforts to low-income communities. Photo by Imani Khayyam.

JACKSON — For Mississippi's third graders, the stakes for good performance on the reading test that can knock them out of timely promotion to fourth grade are now higher than ever.

State law requires public schools to retain a third grader scoring on the lowest achievement level on the Reading Summative Assessment unless he or she qualifies for a good-cause exemption. Good-cause exemptions are circumstances such as learning English, having an IEP or performing well on an alternative assessment that might allow a student to promote to fourth grade despite their test scores.

The Mississippi Legislature passed an amendment in the past session to require students, starting in the 2017-2018 school year, to perform higher than the two lowest achievement levels to go on to 4th grade.

Although some parents have criticized the more rigorous tests and whether or not they serve as an adequate measure of literacy, State Superintendent of Education Dr. Carey Wright has strongly supported such initiatives to stop schools from promoting students reading beneath grade level to the next grade, limiting their opportunities for success.

Tollison spoke at the Capitol today with the National Campaign for Grade-Level Reading, which focuses its philanthropic efforts on grade-level reading by the end of third grade, especially for low-income students. The state announced its statewide participation in the program and Ashley Sheils as its campaign director.

Sheils says the campaign will work with an assistive board to do outreach within the state and provide technical assistance to communities interested in creating a plan. Communities that create satisfactory action plans focusing on school readiness, attendance, summer and after-school learning, and third-grade reading will be eligible for grants to support their goals.

Presently, the City of Oxford and surrounding Lafayette County, as well as Gulfport, participate in the initiative. The National Campaign for Grade Level Reading recognized Gulfport as a "Pacesetter" for its success in improving reading outcomes for low-income students. Sheils said at the meeting today that one of the first priorities of the campaign is to reach out to communities that have large populations of low-income families and students.

Sammy Moon, a campaign board member and coordinator of the Mississippi Association of Grantmakers, told the Jackson Free Press that he hopes this project will help bridge the gap between the work of the Legislature to promote higher literacy standards and of the State Department of Education and schools that implement that change on the structural level.