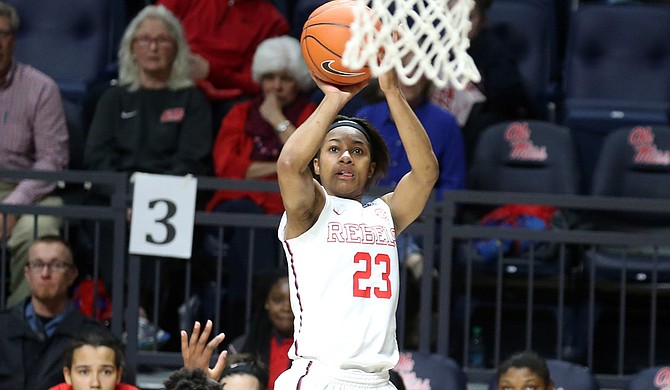 Last season was a disappointment for the University of Mississippi women's basketball team. The Rebels went 10-20 overall and 2-14 in SEC play, posting their fourth losing record in the last five seasons.

There was one breakout performance, however, and that was guard Shandricka Sessom's play. In her sophomore season, she led the team in scoring with 15.6 points per game, finishing sixth in the SEC in scoring, and she came in third on the team in rebounds with 5.1 boards per game.

The Rebels signed Sessom after her standout play at Byhalia High School, where she was a four-year letter athlete in basketball and also ran track. She was a three-star recruit and ranked as the 21st guard in the nation and the sixth best overall player in Mississippi. While at Byhalia, Sessom was named the district's Defensive Player of the Year in the 2010-2011season and Co-Defensive Player of the Year in the 2012-2013 season.

As a college freshman, the Mississippi native averaged just 5.3 points, but there were signs of great things to come.

The UM guard scored 21 points and chipped in nine rebounds, five steals and three assists in the team's game against Mississippi Valley State University. She is the first UM women's player to score more than 20 points as a freshman, and her five steals in that game remain a career high as she heads into her junior season. She played in 31 games and had 23 starts in her first season, and earned a spot on the SEC First-Year Honor Roll for her work in the classroom.

After a breakout performance as a sophomore, Sessom became one of three finalists for the 2015 Gillom Award, which the best women's basketball player in the state of Mississippi receives, competing with Delta State University's Chelsey Rhodes and Mississippi State University's Victoria Vivians, who was the eventual winner.

Part of the reason for her inclusion as a finalist for the Gillom Award was her field-goal percentage, ranked No. 10 in the conference and No. 29 in the nation. She played in 30 games with 26 starts and posted several career highs, including 28 points against the University of Arkansas-Pine Bluff, 11 rebounds against Tulane University and seven assists against Alabama A&M University.

SEC coaches named Sessom to the preseason second-team All-SEC, and she was the only Rebel to earn a spot on either the first or second team. She is the first women's UM player to be named to preseason All-SEC since Tia Faleru in 2014.

If Sessom is going to help the Rebels improve this season, she must help them win on the road. Last season, UM went 2-10 away from Oxford and 0-1 at neutral sites, compared to its 8-9 record at home.

Sessom and the Rebels start the season this Friday, Nov. 11, at home against Southeastern Louisiana University. UM plays four home games before taking on Wisconsin University in the University of Nevada, Las Vegas Thanksgiving Tournament.

This team doesn't play a true road game until Dec. 4 when it travels to West Virginia University. UM doesn't hit the road again until conference play begins on Jan. 5 against the University of Alabama.