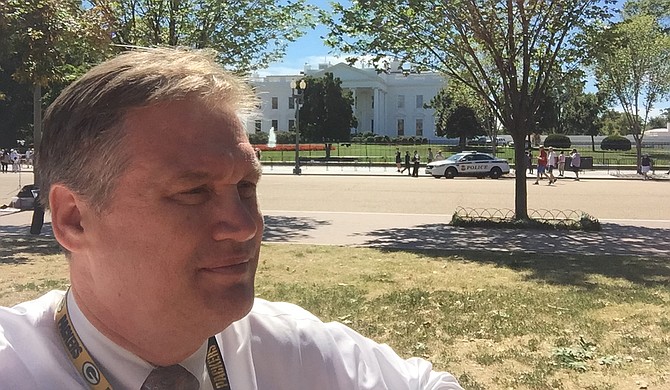 An award-winning academic paper doesn't often turn into a documentary film, but for Wisconsin-native James Theres, that's exactly what happened. The film, "The 30th of May," tells the story of the memorial event of the same name, which is a yearly march from Vidalia, La., to Natchez, Miss., that celebrates African American freedom and military service.

The event first began July 4 1867, but the date of celebration changed the following year when Gen. John A. Logan declared May 30 as Decoration Day, which ultimately went on to become Memorial Day, as a way to begin national healing after the Civil War. Since 1889, many African Americans have taken part in the current iteration of the event, now a 4.5-mile march known simply as The 30th of May, which starts at Zion Baptist Church in Vidalia, goes over the bridge into Mississippi and ends at the Natchez National Cemetery.

"It's an incredible tradition," Theres says. "There were about 750 participants this past year, and they come from all over the country. We interviewed some from Memphis, Tennessee, Chicago and Augusta, Georgia. It's a lot of folks who grew up in the area (who are) coming back for the holiday."

He first learned about the more-than-100-year-old celebratory march through Orin Hatton, one of Theres' colleagues at the National Cemetery Administration in Washington, D.C., where he works as a speechwriter. His initial response: "There's no way."

This interaction inspired Theres to start researching the event as part of his master's degree thesis project at Jackson State University, which he attends remotely. After his paper won an award at the Phi Alpha Theta Conference and the Dr. Margaret Walker Alexander Award at JSU's Creative Arts Festival in April, he decided he wanted to turn the research into a documentary and asked Chris Windfield, a Jackson State alumnus and artist, to co-direct the film with him.

The documentary, which won a gold award at the International Independent Film Awards this summer, primarily uses archival footage and interviews with veterans, organizers and participants to tell the story of the celebration's evolution and the people intertwined with its history. The film also features an original song from Jackson-based R&B artist Kerry Thomas and animated segments from Windfield that act as transitions between portions of the film.

"He created four to five pieces of animation that are just incredible," Theres says. To create the animations, Windfield used original stills and videos from the celebration as his template and turned those images into animations that end by turning back into the original image.

One of the stories that the film tells is that of Wilson Brown, a slave who jumped into the Mississippi River and swam to a Union gunboat so he could emancipate himself. Brown went on to enlist in the Union Navy and fought on a command ship at the Battle of Mobile Bay in Alabama. He later received a Congressional Medal of Honor for his service in the battle and is buried at the Natchez National Cemetery.

The documentary also shares the story of formerly enslaved Union soldiers who tore down a slave market in Natchez called "Forks of the Road." The film tells the story through a letter from a Wisconsin soldier that the Milwaukee Daily Sentinel published in 1864.

While the march from Vidalia to Natchez is still colloquially referred to as The 30th of May, the celebration has taken place on Memorial Day since the 1870s. Theres says there were several instances in which he asked locals to tell him about Memorial Day activities, and their response was, "Oh, you mean the 30th of May?"

"The only African American communities connected to this specific date, the 30th of May, are right there in Natchez and Vidalia," Theres says.

The celebration, which includes a parade, bands and dancers, is an event that many families from Natchez and Vidalia have passed down through the generations. An example of this is World War II veteran Frank Williams Jr., who has participated in the march since the 1930s, and whom Theres describes as one of the "stars" of the film.

"This has been going on for a long time," Theres says. "Every year, despite the obstacles of the river, of having to ferry across, folks just kept doing it."