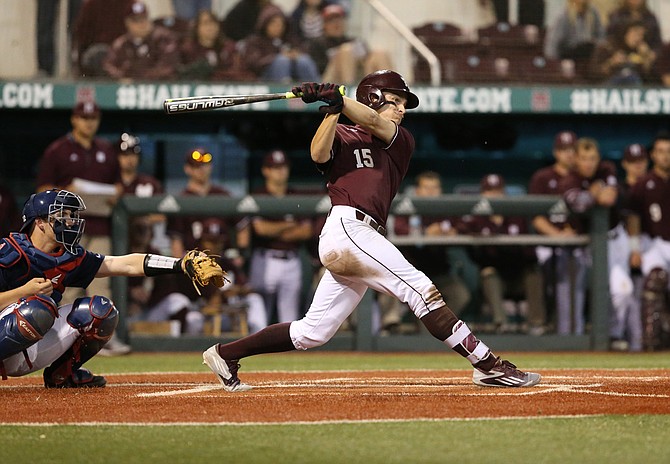 JACKSON — Athletic talent is nothing new in Jake Mangum’s family. The Mississippi State University freshman outfielder comes from a long line of athletes who have made their mark on sports in our state.

Mangum’s grandfather, John “Big John” Mangum, was a standout on the football field. He played for legendary University of Mississippi football coach Johnny Vaught but later transferred to the University of Southern Mississippi, where he became a star on the gridiron. He went on to play for the Boston Patriots in the American Football League.

Two of Big John’s sons became stars on the football field, as well. John Mangum Jr. was the state Player of the Year in high school before moving on to play for the University of Alabama. He later played for the Chicago Bears in the NFL. Kris Mangum also played for the Crimson Tide before he transferred to the University of Mississippi to play for the Rebels. He then joined the Carolina Panthers in the NFL, who reached Super Bowl XXXVIII.

It should be no surprise that Jake Mangum, who is the son of John Jr., would have success in sports. What has been a surprise is how quickly he reached that success.

The newest Mangum athlete was a star on the baseball field at Jackson Preparatory School. As a high-school senior, he batted .504 and went 8-0 as a pitcher with a 1.48 ERA.

The Pearl, Miss., native chose the Bulldogs over the Rebels, the Crimson Tide and the Auburn University Tigers.

Mangum has exceeded expectations in his first year in Starkville. College pitching hasn’t stopped him from knocking the cover off the ball. He is batting .427, which is the best average for a current NCAA freshman and for any SEC player this year. It’s also the third-best average in the nation overall.

In right field, Mangum has a .956 fielding percentage and is six-for-seven in stolen-base attempts. He leads the Bulldogs in batting average, on-base percentage and triples. The freshman also ranks second in hits, steal attempts and stolen bases, third in games played, fourth in slugging percentage, and fifth in runs scored and total bases.

Mangum’s showing on the field this season has led to him racking up awards and honors. He is the first MSU player to be name SEC Freshman of the Year, despite the program having plenty of great players over the years, and he also earned the titles of First-Team All-SEC and Freshman All-SEC. Former Bulldog great Rafael Palmeiro was the last MSU freshman to be named All-SEC First-Team back in 1983.

On May 23 Mangum became the first freshman and fifth Bulldog in history to win the Ferriss Trophy, which is given to the top college-baseball player in Mississippi. The right-fielder had to beat out two of his own teammates, Dakota Hudson and Reid Humphreys, for the honor. He also won the award over Delta State University player Will Robertson and UM player J.B. Woodman.

Mangum continued his hot hitting in his first ever SEC Tournament game. He went two-for-four with an RBI and run in the No. 3-ranked Bulldogs’ 4-1 win against Alabama on Wednesday, May 25.

MSU faces Louisiana State University today, May 26, at 8 p.m., which will air on the SEC Network.