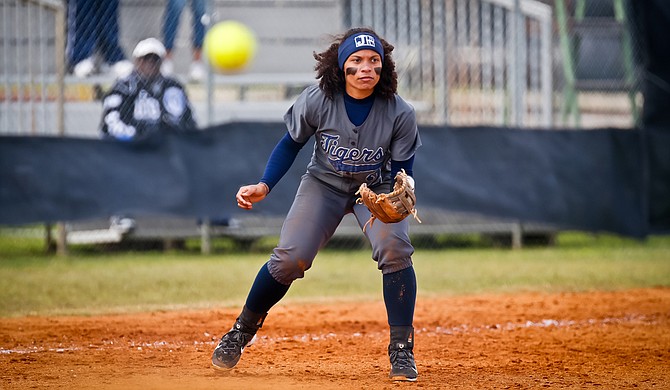 Jackson State University's softball season has been mired in struggles. The Tigers are currently 8-28 overall and 6-12 in the Southwestern Athletic Conference, which puts them in last place for the Eastern Division. In the preseason, many sports analysts predicted that JSU would finish third in the East.

That doesn't mean the Tigers haven't had many bright spots this season, though, and one of those is senior infielder Canessa Swanson.

In her freshman season at JSU, Swanson made an instant impact, earning the title of 2013 SWAC Freshman of the Year and Second-Team All-SWAC at second base. She started 52 out of 53 games and hit .296 with 20 RBIs, seven doubles and a triple. She also stole 17 of 21 bases and scored 39 runs.

Swanson was a star on defense during her freshman season, as well, and had a field percentage of .960. That year, she earned the titles of College Sports Madness Player of the Week, SWAC Player of the Week and SWAC All-Tournament.

A move to catcher as a sophomore didn't slow Swanson down. She batted .262 with 43 hits, two doubles, four triples and one home run. She scored 43 runs and stole 39 bases with 21 RBIs. Swanson earned SWAC First-Team All-Conference at catcher, and the National Fastpitch Coaches Association selected her as an All-American Scholar Athlete.

As a junior, Swanson moved to third base, but it didn't slow her production on the field there, either. She earned the title of Co-Player of the Year with Thomasina Garza of Texas Southern University. Swanson batted for .289 with 37 hits, four triples and 20 RBIs, led the conference in runs with 44 and tied for first in stolen bases with 35. She also earned SWAC Hitter of the Week and College Sports Madness Player of the Week honors.

Before the start of this season—Swanson's last with JSU—the SWAC selected her as the Preseason Player of the Year and Preseason First-Team All-SWAC. She hasn't disappointed in her final season a Tiger.

Currently, she is second in the conference with a .436 batting average, third in slugging percentage at .667, first in runs scored with 38, fifth in hits with 51, tied for second in doubles with 11, tied for third in stolen bases with 12 and first in triples with five. She is ranked in the top 50 in six NCAA categories, including No. 14 in triples per game and No. 29 in runs per game.

While she has been a star on the field, Swanson has been just as much of a star off the field. The Jackson State senior is one of the top 15 candidates to become a semi-finalist as a Diverse 2016 Arthur Ashe Jr. Sports Scholar Award out of more than 1,000 other student-athletes. Diverse: Issues in High Education, which is a source of news, information and commentary on issues concerning diversity in American higher education, started the sports scholar awards in 1992 to honor students of color who boast the same standards as former tennis great Arthur Ashe.

Swanson has racked up 120 community service hours in just one year, has made the President's List for four straight years and holds a 4.0 GPA at JSU, where she is studying pre-medical biology.