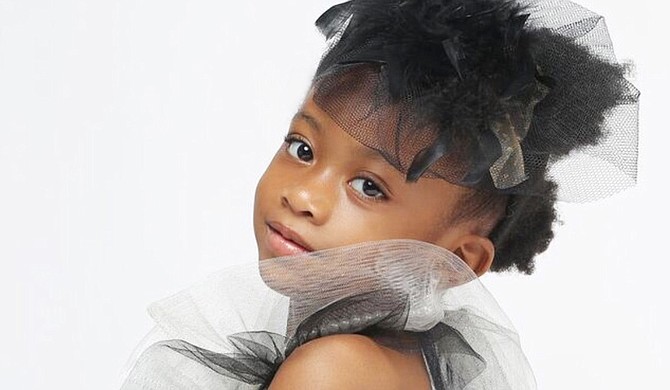 Every morning, Makaila Faith Nixon and her mom, Dee Bookert Nixon, start with stating their daily affirmations while looking at their reflection in the mirror.

"I am smart! I can do it! I am beautiful! I am proud of myself!" Makaila says to the Jackson Free Press, recalling her morning ritual. "It makes me feel good."

She is only 5 years old, but having an anesthesiologist as a dad (Larry James Nixon) and a nurse as a mom, who co-founded the Cure Sickle Cell Foundation, and a musically driven brother, Jaden Wesley, who plays the violin, is only fuel to Makaila's fire in pursuing her many dreams.

"I want to be a doctor, big model and ballerina, but I have (scary) dreams too," Makaila says. The Jackson native has been modeling professionally for nearly two months and just recently did a soft launch for her jewelry line, Just Faith.

Makaila loves jewelry. Her favorite pieces include "shaky earrings," she says, or those adorned with several hanging flattened beads that make noise when rattled, and her jeweled owl earrings, which are an assortment of pink, blue and white studded jewels on a small owl-shaped platform.

"She started (modeling) last year at (age) 4, and I let it go a little bit because we didn't know where to go or how to do it," Dee says. "I'm a nurse by training, and this is all new to me. The Bible says study and shows yourself, so I studied, I researched, I read, and I started reaching out to people doing what my daughter wants to do."

Makaila is like any other 5-year-old with big dreams of taking over the world, especially as a young role model of color. When she isn't playing with toys, riding her bike or dancing to Beyonce's "Run The World (Girls)," Makaila is strutting down the runway, posing for professional photographers and is key in developing the color palette, names and designs for her jewelry line, which local business Kahrna's Kreations makes. Makaila's favorite colors in the line include yellow, blue, pink and purple. "We're learning as we go," Dee says. "Not only is (Just Faith) for children, but eventually there will be a line of matching sets for moms. The great thing is all the pieces are easy to mix-and-match, they are fashion forward, fun, trendy and fit different budgets." Just Faith has a line of earrings, bracelets, necklaces and will eventually do head pieces.

Makaila has worked with several well-known photographers in Jackson, including Mitch Davis, Sidney Conley, Elliot James, Jack Patterson and Jay Johnson. "Not just young girls of color, but all girls can relate to Makaila," Dee says. "I want her to take on this big world and still hold her own, and when I'm not there in her ear, I want her to remember her affirmations."