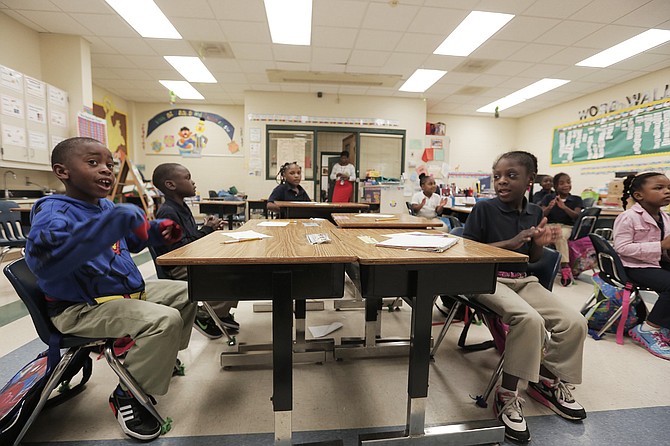 JACKSON — After school at Galloway Elementary School, the moms talk about reading levels.

Marqueta Washington, whose youngest son is a second grader at Galloway Elementary, says he reads at a 3.9 level, the average for a child who has been in third grade for nine months. Her fourth-grade daughter reads at a 6.9 level.

Like her 13-year-old son, Washington's youngest children are on the honor roll. She says she couldn't do it without Operation Shoestring, whose after-school program serves pre-kindergarten through eighth-grade children who go to Galloway, Brown Elementary and Rowan Middle Schools.

"I've had three children to go through Operation Shoestring for after-school and summer camp, and I would not have it any other way. They learn, they play, they exercise, and by the time they get home, they're exhausted," Washington said.

It makes sense that they would be tired—Operation Shoestring students stay active after school. Except for Galloway Elementary's upper elementary students, the program provides after-school services to children at their own schools; the older Galloway kids travel up the street to Operation Shoestring's licensed childcare facility. After a healthy snack, they break into groups with their classmates, based on their grade levels. They get an hour of homework help from Operation Shoestring teachers who work closely with their daytime classroom teachers to gauge each student's needs.

After a period of physical activity, the students return to their classrooms for an academic enrichment activity to reinforce what they learn at school. At Galloway Elementary, when they leave with their parents and grandparents in the afternoon, they zip out the door, waving worksheets and smiling.

Proponents say high-quality after-school programs are one solution to Mississippi's ongoing education problems, including some of the lowest scores on national tests, and Operation Shoestring's data seems to support their claims.

Kids enrolled in the program tend to do great at school, according to data from report cards and tests collected by the nonprofit. During the 2014-2015 school year, pre-kindergarten through eighth-grade students all saw statistically significant gains in academic performance. Pre-K through fifth grade students also saw behavioral improvement.

With headquarters nestled alongside the pothole-riddled Bailey Avenue, Operation Shoestring does its best to make sure that the students at Galloway, Brown and Rowan have the smoothest ride through school as they possibly can.

Operation Shoestring has long stood as a pillar of community support for children in the midtown, Mid-City and Georgetown neighborhoods surrounding it. It was founded in 1968 at nearby Wells United Methodist Church as a response to racial unrest and the economic impact of the flight of middle-class white citizens from Jackson as a burgeoning black populace from the Delta attempted to establish itself.

Now, decades later, Operation Shoestring still mostly serves the Georgetown and Mid-City neighborhoods with after-school and summer programs they might not get otherwise.

Most states have statewide after-school networks. Mississippi is one of three states that don't. But thanks to a Charles Mott Foundation grant, Operation Shoestring, working with other organizations such as the Mississippi Department of Education, the governor's office and other stakeholders in out-of-school-time providers, are planning a statewide after-school network.

Operation Shoestring Programs Director Amber May says they're working together to create a network that focuses on fostering partnerships, maintaining the quality of after-school and summer programs, and keeping up resources and financial support.

May says she, along with Jackson Public Schools School Board Secretary Jed Oppenheim and Anthony Johnson, executive director of Alignment Jackson, traveled from Oxford to the Gulf Coast to observe after-school programs and talk to their providers in order to create an after-school network. (The Delta is not yet included.) Each area they visited had its strengths, but a common problem each place had was transportation: how to get students to and from after-school care sites from schools stumped many operators.

Despite these challenges, May says, after-school operators in the state are hopeful that they can create a network to serve Mississippi's students.

"We feel after-school is a solution to the educational crisis in Mississippi," May told the Jackson Free Press.

A 2007 study from The Collaborative for Academic, Social and Emotional Learning showed that after-school programs using evidence-based approaches to caring for children saw better outcomes for children. Kids' academic, personal and social skills increased, and they felt better about themselves in general.

Additionally, the Promising Afterschool Programs Study, concluded in 2007, found that disadvantaged students who regularly participate in high-quality after-school programs usually see significant gains in test scores and work habits, as well as a corresponding decrease in behavioral issues in school.

After-school programs do more than just help increase academic success: They might also prevent juvenile crime. The Afterschool Alliance, a nationwide group dedicated to increasing affordable after-school options for K-12 students, reports that most juvenile crime occurs between 3 p.m. and 6 p.m.—when 25 percent of children, and 17 percent of Mississippi's children, are generally unsupervised while their parents are at work.

Operation Shoestring parents say the program offers much more than supervision, though.

"I love that they work so closely with Galloway in making sure that what's being taught throughout the day is reinforced in the afternoons," Washington said. "It makes my job of reinforcing at home a whole lot easier. What they don't quite possibly grasp during the day, someone's there to help them during the afternoon."

"I love Operation Shoestring. I wouldn't trade it for the world," said 33-year-old Galloway Elementary PTA member Chandra Mayes. Her second- and fourth-grade children both have reaped the benefits of Operation Shoestring, where they get their homework done, so they have time to enjoy themselves by the time they get home.

"Mine are going to stay in something at all times. They aren't going to be out in the streets," Mayes said.